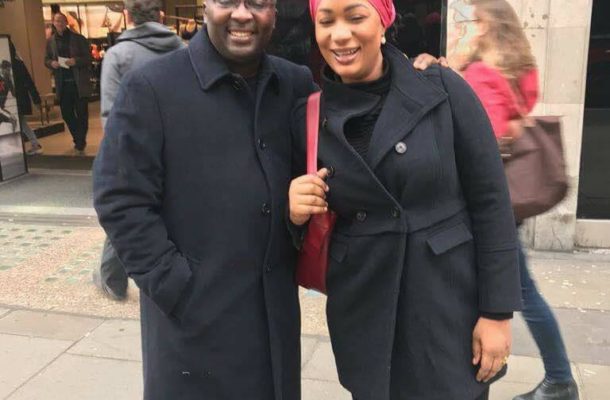 Ghana Vice President Dr. Bawumia with his wife in London on Saturday morning

Ghana's Vice President Dr Mahamadu Bawumia has been spotted walking the streets London indicating that he is in good health, despite claims from certain quarters that he has been hospitalized on the verge of death, Ghanaguardian.com can exclusively reveal.

The public appearance of Dr Bawumia on Saturday has completely rubbished claims from certain quarters that the Vice-President was not being seen by visitors in hospital because he was doing poorly on the verge of death.

His presence on the streets of London shows that he has been out of hospital and healthy to be able to walk around the city while meeting and greeting Ghanaians who spotted him.

With Oxford Street being one of the favourite spots frequented by Ghanaians visiting London, the presence of Dr Bawumia and his wife drew interest from natives of of the West African country who work in shops on the street or those visiting to see famous places.

The Vice President and his wife were interrupted several times with Ghanaians seeking to greet them and wish them well or to take selfies to prove to their friends and relatives that the Dr. Bawumia was not on his death bed.

A Ghanaian who looked to be working in one of the offices around greeted the Vice President and introduced himself as Christian Asante before Dr Bawumia told him he was taking a walk.

"I am a Ghanaian and my name is Christian Asante," the Ghanaian told Dr Bawuwia who responded and said: "we are taking a talk."

Dr. Bawumia left Ghana for the United Kingdom last week Friday on medical leave after the Presidency revealed that he had been taken ill earlier in the day, and was undergoing medical tests.

However the visit did not go down well with some political opponents of the ruling NPP party who sparked mendacious social media updates claiming Bawumia was on the verge of death.

This sparked panic in the country from citizens over the highly respected politician who is seen as one of the key backbones of the government.

Bawumia, as Chairman of the Economic Management Team of the New Patriotic Party (NPP) administration, is playing a key role by assisting President Akufo-Addo to restore Ghana back onto the path of prosperity after just one year in power with solid economic policies.

On various social media platforms, some sympathizers of the National Democratic Congress (NDC) tried to make the entire world believe that Dr. Bawumia is seriously ill and unable to discharge his duties as vice president.