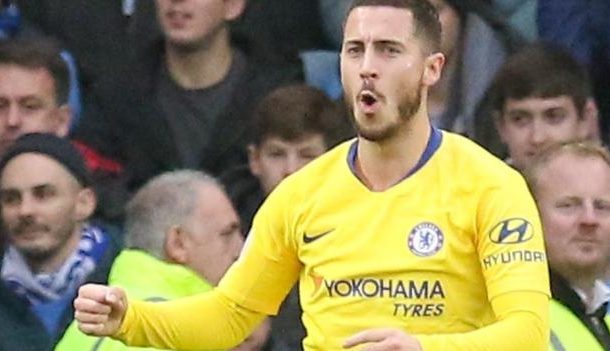 Chelsea manager Maurizio Sarri says there is more to come from Eden Hazard, after the Belgium forward masterminded Chelsea's win against Brighton at the Amex Stadium.
Hazard scored one goal and assisted another as Chelsea, who started without a striker, held on to beat the Seagulls.
The 27-year-old set up the Blues' opener with a wonderful pass across the face of goal for the arriving Pedro to tap in on 17 minutes.

Willian then pounced on a loose pass from Leon Balogun and played in Hazard, who ran from just over the halfway line, outpacing the Brighton defence before slotting past Mat Ryan.
It was his eighth league goal of the season, breaking an eight-game scoring drought, and he has nine assists - the most in Europe's top five leagues.
"I think that Hazard could have played better because his level is a very high level," said Sarri. "He can do more for him and for us.
"But I think after the two injuries, he lost the physical condition. Now he's improving. In one or two matches he'll be back at the top."
Brighton, who welcomed back Glenn Murray to the starting XI after a shoulder injury, barely threatened in the first hour.
But they improved following Murray's substitution for Romanian striker Florin Andone and pulled a goal back in the 66th minute.
Bernardo headed a cross back across goal and Solly March was unopposed as he hooked his shot past Chelsea keeper Kepa Arrizabalaga.
Seagulls fans felt Marcos Alonso should have been sent off as last man after fouling March late on, but the Spaniard was only shown a yellow card.
Chelsea withstood the hosts' late attacks to record their first win in three away matches and stay in fourth in the Premier League, two points behind Tottenham.
Brighton remain in 13th place.

Reaction to Chelsea's win and Sunday's other Premier League action

Hazard's heroics
Chelsea only have one fit striker in Olivier Giroud after Alvaro Morata suffered a knee injury in midweek, but they chose to keep the Frenchman on the bench.
Hazard made up for the lack of firepower up front, starting as a false nine flanked by Willian and Pedro, and the Belgium continued his fine form.
He has now been involved in more Premier League goals this season (17 in 16 games) than he was in the whole of last season (16 in 34 games).
His influence waned in the second half as Brighton grew into the game and his afternoon was ended by a hefty challenge from Dale Stephens, which led to him limping off in the 83rd minute.
Like Hazard, Chelsea's performance dropped after the break and Brighton finished the stronger of the two teams.
They held on though, and Sarri will surely be pleased they did not squander their lead and were able to build on last weekend's impressive 2-0 victory against Manchester City going into the busiest part of the season.
"I think that we played a good match," said Sarri, who confirmed Hazard's injury was not serious.
"We could have won by more goals. We conceded a goal in a moment when we were in full control. The last five minutes against a very physical team were difficult to manage."
Brighton leave themselves 'too much to do'
Brighton were poor in the first-half and careless in possession.
Top-scorer Murray, so often the hero for Chris Hughton's side, struggled to gain a footing, failing to register a shot or a touch in the Chelsea box.
March had their sole effort on goal in the first half, a 20-yard effort that was easily collected by Kepa.
They started the second half in the same manner and Anthony Knockaert was getting visibly frustrated.
The fact Brighton improved after Murray's withdrawal on 60 minutes was telling and the Seagulls movement and intensity increased with the introductions of Andone and Yves Bissouma.
Brighton pressed hard for an equaliser and Sarri admitted he was "worried" about the last five minutes of the game.
Lewis Dunk had their best chance to get a point, but his header in the 92nd minute was just wide.
Hughton admitted they left themselves "too much to do", despite a spirited last half hour.
"They had two chances in the first half and scored two goals," said Hughton. "We started the game well but you can't give them the leg up by going behind.
"Then you have to have a response in the second half which we did in the second-half. If we get the one goal then anything can happen. I can't fault the effort our players put in."
Discussing Alonso's yellow card for pulling back March, Hughton added: "Some refs would have give it [a red]."
Man of the match - Eden Hazard


Eden Hazard is the first Chelsea player to assist a goal in four consecutive Premier League games since September 2014, when Cesc Fabregas did soStats - Chelsea rack up the goals