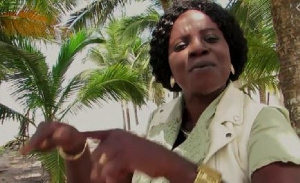 The veteran musician disclosed that the musician stole her song ‘Yensom Obiara’ but decided not to press any charges against him.

She revealed in an interview with Tony Best on Akoma FM’s Kwantenpon Drive that Brother Sammy once took her music without her knowledge but pleaded guilty so “I forgive him else the damages he would have paid because you can’t take someone’s property without her consent”.

Hannah Marfo, who has been in the Ghanaian gospel music industry for over two decades and with 13 albums to her credit, told listeners how God changed her life through music.

The Kumawu-born musician said she was a seamstress when she realized God can change destinies though she didn’t know Him then.

“When I devoted my time to serve him well things changed for better,” she narrated in Twi.

The ‘Ototrobonsu Nyankopong’ hit singer added: “I started singing by joining a band in Kumawu. When my father introduced me to the band, I really served them well and because of my passion I was able to achieve my dreams of being a gospel musician.”

Recounting how she writes her songs, the veteran musician explained that “sometimes when I read the Bible I get inspired to write songs and some are personal experiences.”

She has over the years written songs for other musicians.

Commenting on Covid-19, Hannah Marfo, who is currently promoting a new album ‘My Praises’, noted that sometimes pandemics happen to bring people closer to God because homosexuality and a lot of anti-social vices are rampant, distancing people from God.

Touching on the on-going feud between Patience Nyarko and Joe Mettle, the musician called for peace.

“My advice for Joe Mettle and Patience Nyarko is that I pray peace prevails…Some are naturally good writers and some also will pick old songs and reproduce it. So let us be one and be together so we will all benefit from royalties,” she urged.