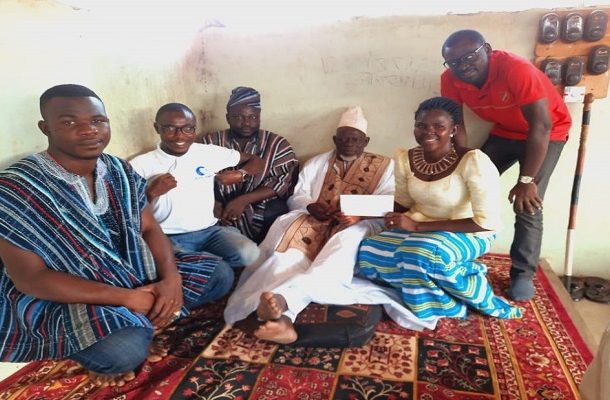 Buipewura Abdulai Jinapor II, has made a cash donation of one thousand Ghana Cedis ( Gh¢ 1000 ) to Wipe-Away Foundation as part of his efforts to support their activities.

The cash donation was done on Friday, April 16, 2021, at a short ceremony at Busunuwura’s Palace in Busunu in the West Gonja Municipality of the Savannah Region.

The Busunuwura said, Buipewura has taken a keen interest in the activities of Wipe-Away Foundation and considered it appropriate to assist them.

“We want to thank you and your donors, most of whom are also vulnerable for what you are doing for our people,” he said.

Speaking after receiving the cash donation, Chief Musah Abdul Fataw affectionately called Agro-wura, who is the Foundation’s Operations Manager, expressed gratitude to His Royal Majesty Jinapor for his benevolence to the Foundation to assist them in ensuring that their goal to eradicate poverty, hunger and chronic diseases in our society is achieved.

He further revealed that, the cash donation of one thousand Ghana cedis ( Gh¢ 1000 ) is the highest of its kind from any paramount chief this year, a gesture he opined, words can not summarize how thrilled they are.

On his part, the Public Relations Officer (PRO) of Buipewura Jinapor II, Prince Gbanso, said the donation was borne out of a conversation and fundraising on a Whatsapp platform named “Jinapor Philosopher Chief”.

The donation came at a time the foundation carved out a health policy scheme known as SoHat which premise is to pay hospital bills of their clients who subscribe to the health scheme.