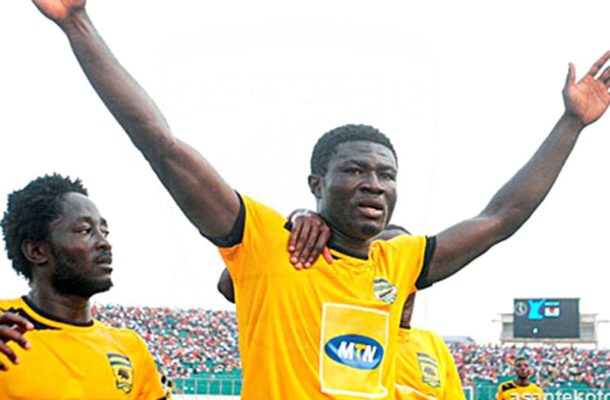 But for his wife he could have joined Hearts of Oak for the money on offer but Kwabena Adusei chose Kotoko after he was told to play even for free when it is Asante Kotoko by his wife.

The defender says he was on the verge of joining Hearts of Oak for a mammoth signing on fee in 2012 from Medeama but just before he could put pen to paper Didi Dramani who was joining Kotoko also contacted him to make the move to Kumasi.

He says initially he was not convinced as Kotoko were just paying peanuts to Hearts of Oak's mammoth signing on fee.

But his wife was the game changer as she told him If its Kotoko who want to sign then you can even  play for them for free.

He says Hearts were willing to offer him GHC 80,000 whiles Kotoko were quoting just GHC25,000 but in the end he chose to play for Kotoko after his wife's intervention.

In an interview with Ashh Fm, the former Kotoko defender disclosed that his wife xonvinced him to play for Kotoko despite their small money.

“I nearly joined Hearts Of Oak before coming to Kotoko. CK Akonnor recommended me and I had a fruitful discussion with them, and they were willing to pay me 80,000 Ghana cedis,” he told Ashh FM.

“Shortly I received a call from Didi Dramani and after negotiations I joined Kotoko although they wanted to GHS25,000. In fact, I was not happy but my wife told if to choose Kotoko ahead of Hearts even if they will not pay.

“Another top Ghanaian top coach who I don’t want to mention his name also advised me to join Kotoko,” he added.

Azaro joined South African  side Mpumalanga Black Aces in 2014 after his deal with Kotoko expired and was part of the 2014 CHAN squad that finished second in South Africa.

Kwabena Adusei in the past played for Kessben Fc, Tema Youth among others.

The rugged center back has now retired from football and now into the trade of building materials and hardware.