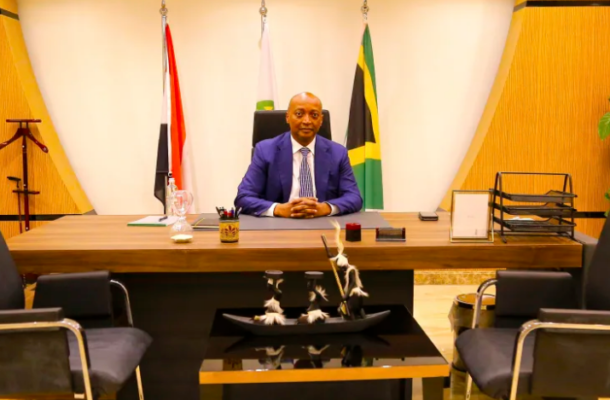 Confederation of African (CAF) President, Dr Patrice Motsepe has announced that he will through his foundation donate $10 million to the development of football in African schools.

He made this announcement on Monday, during  his first tour to an African country Côte d’Ivoire since beginning his reign as the CAF Presiden

The final engagement of the day for the CAF/FIFA joint delegation was the launch of the pan-African inter-school football championship in Abobo. Fittingly, a football match featuring mixed teams of schoolchildren kicked off the initiative, with both presidents putting their technical and tactical football skills to the test as team coaches.

Following the match Dr Motsepe announced that the Motsepe Foundation, founded by himself and his wife Precious Moloi-Motsepe, would make a donation of USD $10 million to the ground-breaking new pan-African inter-school football championship, which will take place across the six zonal regions of CAF.

After the match, the FIFA President said: “The gesture from the Motsepe Foundation, Patrice and his wife Precious, is exceptional.

It’s a step forward for this competition that will give hope and joy to thousands of children in Côte d’Ivoire and throughout Africa who love football. Thank you to the Motsepe family for showing us Ubuntu in action."

The joint delegation ended their visit to Côte d’Ivoire with a press conference focused on the African league, the development of women’s football, strengthening football governance, this November’s FIFA Arab Cup in Qatar and how to bridge divisions in Ivorian football.

Both the CAF and FIFA presidents also outlined the plans to roll out the inaugural pan-African inter-school championship in Côte d’Ivoire to the assembled Ivorian and African media.


The presidents of CAF and FIFA travelled to Côte d’Ivoire on Monday as part of their first joint mission in Africa since the election of Dr Patrice Motsepe as the confederation’s new president in March. Central to their two-day itinerary were meetings with government and football officials, with the focus on promoting unity and serenity, developing and strengthening the country’s football governance and launching the continent’s inaugural pan-African inter-school football championship in Abobo, a municipality just outside the country’s capital Abidjan.

Arriving in Abidjan they were greeted by members of the normalisation committee of the Ivorian Football Federation (FIF), including President Mariam Dao Gabala, who along with her colleagues has been responsible for bringing football back into play in Côte d’Ivoire.