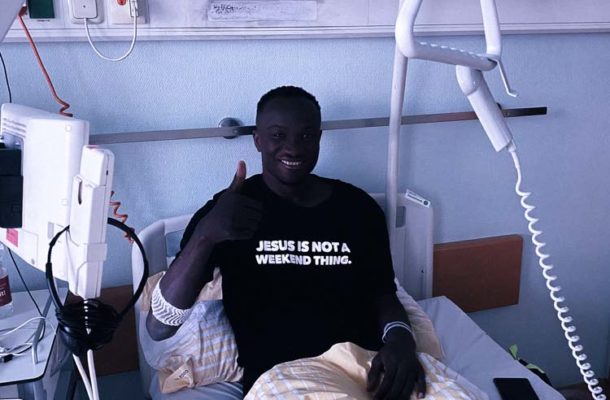 A Sports Physician and CAF Medical officer, Dr Prince Pamboe has sent a word of counsel to beleaguered Ghanaian striker Raphael Dwamena to consider his future in football amid the persistent heart troubles he has suffered in football.

It had to take the swift intervention of the paramedics at the stadium to resuscitate the stricken Ghanaian striker who is currently responding to treatment.

The said match was suspended after the player collapsed in the first half.

Linz manager Stefan Reiter told the APA. “His defibrillator struck and the doctors were able to stabilize him quickly,

He added that “the good news is “Raphael’s condition is stable.” The rescue chain had “worked outstandingly”. “It didn’t take a second for the paramedics to get to him.”

Raphael Dwamena has been troubled by a persistent heart issue in his career since it was first discovered in 2017 after a medical with Brighton and Hove Albion which resulted in his move to the English Premier League side falling through.

Dr Pamboe has urged the striker to put aside football and pay attention to his life and seek medical help to correct the persistent heart trouble.

“It is time his manager sits with Raphael Dwamena and have a discussion with him. Whatever device was implanted in his heart either could have gotten worse or creating another problem thus there is the need to do a re-evaluation”, he told TV3 on Warm Up+.

The former Levante striker is currently in stable condition after his recent relapse and has been discharged from the hospital.