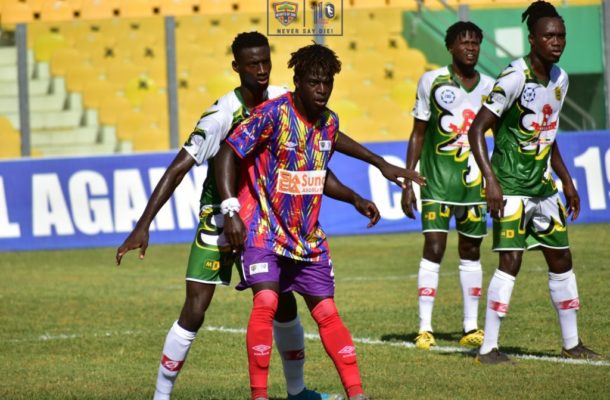 Ghana Premier League champions Accra Hearts of Oak brushed aside a fierce resistance from Guinena side CI Kamsar in their Champions League game at the Accra Sports Stadium.

The phobians laboured in the first half as the Guinean side played with a low block of two banks of four leaving just a man up top.

Hearts of Oak struggled to break down the resolute defensive wall formed by the visitors who were only waiting to strike on counter breaks.

The first half ended goalless with very little goal mouth action from both sides as much of the game was in the middle.

Second half goals from Kofi Kordzi and new boy Salim Adam scored late in the 90th minute to wrap up the win for the phobians.

Returning Kofi Kordzi curled home a free kick from the edge of the 18 yard box before Salim Adams smashed home a cut back from about 20 yards into the roof of the net.

A daunting task awaits Hearts as they will  face Moroccan giants Wydad Athletic Club in the first round in October.

The winner of the first round tie advances to the group stage of the competition which starts in February 2022.