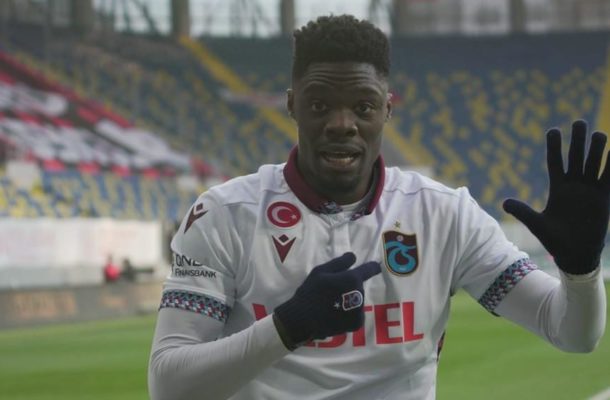 Ghanaian striker Caleb Ekuban returned to action for his Turkish Super Lid side Trabzonspor as they drew 1-1 with Galatasaray on Wednesday evening.

He sat out Trabzonspor's 0-0 drawn game against Rizespor away from home due to muscle injury.

The fit again striker who trained on Monday with his teammates played in his side's crunch game against Galatasaray on Wednesday at the Türk Telekom Stadium.

Ekuban lasted 86 minutes on the field before he was replaced by Flavio Madeiros Silva although he could not get on the score sheet.

A goal from Edgar Le from the visitors in the 76th minute was cancelled out very late by Emre Akbaba in injury time to make it 1-1.

The former Leeds United striker has been integral for Trabzonspor this season across all competitions with his goals coming in handy.

He picked up the injury in his side's 1-1 drawn game against Kayserispor and was ruled out of last Saturday's game but is now fit.