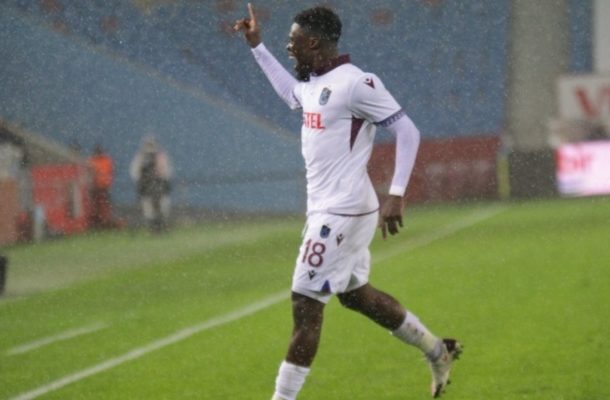 Black Stars striker Caleb Ansah Ekuban continued with his rich vein of form as he helped his Trabzonspor side secure a 1-1 drawn game in their Turkish Superlig match against Goztepe.

The home side started the game in a dominant fashion but failed to break the deadlock of the game as the rearguard of the away side stood tall.

It was the home side who took the lead on the stroke of first half of the game through Adis Jahovic before Caleb Ekuban scored a late leveler in the 88th minute on Wednesday afternoon.

The Ghanaian striker played the entire duration of the game as he netted his ninth goal in 29 matches for Trabzonspor this season.

"It was important to show that we did not give up.

"First of all, it was a game that we did not start well. We had 10 people left at the exact moment we were recovering. We won only 1 point by scoring but showing that stance was the important thing to show that we will never give up." He said after the game.

Trabzonpor are currently fourth on the league log with 64 points after 37 matches.