Calm returns to Kotoko after getting 'enlightened' in Emmanuel Gyamfi charge 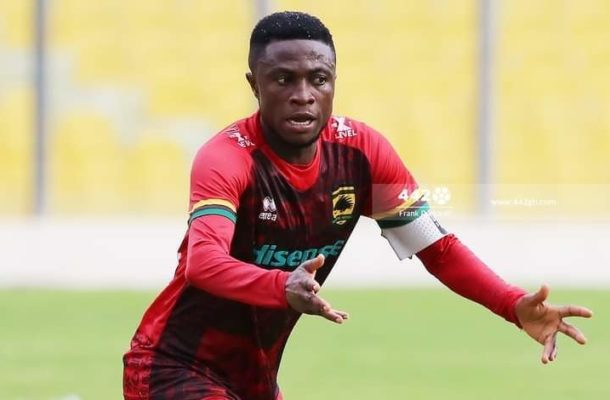 Kumasi Asante Kotoko fans can have a sigh of relief after getting to know winger Emmanuel Gyamfi is eligible to feature in their game against Hearts of Oak on Sunday.

The porcupines had threatened to demonstrate against the GFA upon reading that the diminutive winger has been charged for misconduct after television cameras captured him stamping on the foot of Inter Allies player Andy Okpe.

The FA has charged Gyamfi for breaching Article 34(6)(d) of the GFA Premier League Regulations and the player had  until close of work Friday, 18th June to respond to the charge, after which he will know his fate.

But the Kotoko supporters leadership felt it was a calculated attempt to barr the  player from featuring in Matchday 31 super clash.

They turned their attention on their archrivals, Hearts of Oak, saying their being by the FA.

But according to Hearts of Oak, deputy NCC PRO Ishmael Yussif, Kotoko have disgraced themselves in failing to understand what Gyamfi's charge was all about.

Speaking to Ghanaguardian.com, Mr Yussif said the Kotoko leadership failed to read with tact which has caused Kotoko to issue an empty threat.

"They don't read with tact to understand what a charge is all about so you can pardon them for issuing such empty threats out of ignorance," he said.

They were accusing Hearts of Oak of GFA supports when they didn't really know appeared not to know the player has an option to defend his action.

"They were acting as if he had been banned and were even making references to May 9th disaster, that is clear immaturity.

"But am sure now that they have been enlightened to know the difference between a charge and a ban, they will be guided in their needless utterances."

The two clubs are playing on Sunday at Accra Sports Stadium in the mayday 31 encounter of the 2020/21 Ghana Premier League.

According Mr Yussif it's good to have the two clubs go into the clash with peace but condemned Kotoko for mentioning of Hearts name in their reaction.

The two teams are joint league leaders with 53 points but it's the Phobians who stay on top with their superior goal margin.