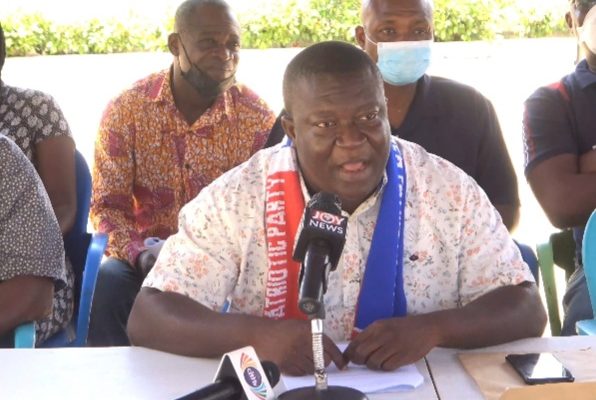 Some aggrieved executives of the governing New Patriotic Party, NPP in the Cape Coast North Constituency of the Central Region, have accused the NDC Member of Parliament, Kwamina Minta Nyarku of making false claims that he has secured a contract for the construction of a number of link roads in the constituency.

“The MP in an interview with Joy TV lied that he had secured a contract to construct link roads from Dahia through to Effutu Kokwado to Effutu Mampong”.

According to the NPP executives, the said projects in the Constituency have already been awarded on contract and work is currently ongoing.

They have therefore described the statement by the MP as palpable lies and called on him to account to the constituents on the said projects.

The projects in question include the rehabilitation of Akotokyir roads, Amamoma roads, Abura New Community, Kwaprow roads and reconstruction of the Cape Coast Technical University roads among others.

The Cape Coast North NPP executives at a press conference in Cape Coast, asked the MP, Kwamina Minta Nyarku, to desist from such falsehood, indicating that the said projects were initiated by the former MP for Cape Coast North, Barbara Asher Ayisi and the NPP government.

The NPP Constituency Secretary, Ebo Sarbah, described the sitting MP as an “incompetent” legislator who doesn’t know where to lobby for development projects.

“By spewing these lies, he has exposed himself that he knows nothing about his role as a Member of Parliament, his mandate and the processes towards securing a contract”.

He maintained that the projects were initiated at a time that Kwamina Minta Nyarku was not an MP.

“These are projects that the MP, Hon. Kwamina Minta Nyarku knows nothing about. As a matter of fact, plans and initiatives on such roads were made at a time he was not an MP. How can one claim to have secured a contract to start something that was started far before he assumed office”? he asked.