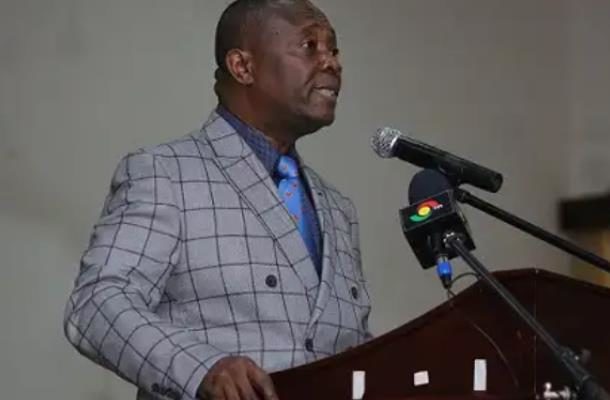 Former Pro Vice Chancellor of the University of Cape Coast (UCC) Prof. George. K. T. Oduro has exposed Angel TV's Captain Smart, saying the Broadcast Journalist has exhibited "sheer "ignorance and mischievous" in his claims regarding alleged payment of salaries into the accounts of the 2020 NDC running mate Prof. Naana Jane Opoku-Agyemang by the University of Cape Coast (UCC).

This, Prof. Oduro, who is a Professor of Educational Leadership of UCC, says the journalist failed to do a thorough research about how the University deals with its lectures, describing critics as novice who lacks common understanding of University administration.

"So for Captain Smart to order Prof. Opoku-Agyemang's to go and withdraw her contract renewal application is sheer ignorance and mischievous".

He indicated that if Captain Smart had any knowledge in the workings of University administration, he would not have made such commentaries against the NDC running mate.

The morning show host had disclosed that the Vice Presidential Candidate for the National Democratic Congress (NDC) has written to the University of Cape Coast(UCC) to renew her contract as a lecturer of the University.

According to him, although the former Vice Chancellor for the University of Cape Coast has ended her part-time contract with the University, she received her salary for the month of August and September and never worked during those months.

To Captain Smart, it is shocking that a woman who has been appointed as a running mate for the National Democratic Congress (NDC) will write to the University to renew her teaching contract.

But Prof. Oduro feels the journalist either engaging in propaganda or exhibiting stark lack knowledge in the topic.

"Initially when I heard the news, I laughed but later I felt it was propaganda he (Captain Smart) was engaging in just to tarnish the name and reputation of the woman," Prof. Oduro claimed.

He explained that, in the University environment, one is appointed a lecturer for a four to six-year contract basis and that is subject to renewal.

He explained further that, there is no arrangement that bars anyone from being a lecturer and running for political office.

He cited an example that, the current Zongo Minister Dr Mustapha Hamid only applied for secondment when he was made the Information Minister and even that he took leave of absence.

He added, "the Executive Secretary of the National Accreditation Board is a parliamentary candidate, but he hasn't resigned from his post. These persons can only resign if they win to become either the Vice President or Member of Parliament."

Responding to claim of salary Prof. Naana Jane Opoku Agyemang received from UCC, Prof Oduro explained that professors who are given post retirement contracts are not necessarily for teaching but for PhD supervision purposes.

According to Prof. Oduro "now that she is the running mate for the NDC, government isn't paying her and so if she is supervising her PhD students and the university pays her, there is nothing wrong with that."

"When your contract in the university is about ending, the university would write to prompt you about it and enquire if you would want to reapply. Second, your Head of Department must also prove that your services are needed and thirdly, there should be a medical report that indicates that you're not up to 70 years yet, but if you are in good health you can reapply for your contract to be renewed."

According to Prof. Oduro, the fact that Prof. Naana has applied for her contract to be renewed doesn't mean the university would approve same.

He continued that, what Captain Smart has done "Is an indictment on the University. It means the University has no rules nor procedures governing its activities".

He added that, before someone is paid in the university, "Your Head of Department must approve that you deserve to be paid before you're paid".

Prof. Oduro intimated that the University just cannot pay anyone for paying sake or simply because she was a former Vice Chancellor. "The University system doesn't work like that."

He ended the conversation by saying that, the University is an orderly institution and Prof. Naana has done nothing wrong putting in her contract renewal application.