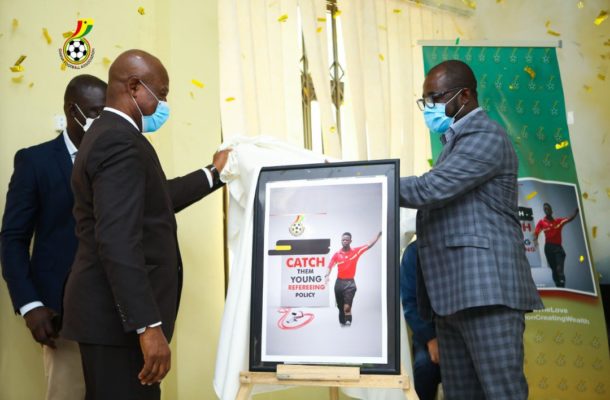 President of the Ghana Football Association Kurt Edwin Simeon Okraku has revealed that matches in the upcoming national U-17 championship in December will be officiated by products of the ‘Catch Them Young’ policy.

The Catch Them Young Policy which was launched in February this year is designed to identify, educate and train young talents between the ages of 13-16 to officiate juvenile matches within their Regions.

Over Two Hundred young boys and girls who were trained by the Referees Department of the Ghana Football Association officiated in the just ended Juvenile Leagues across the country.

‘’Our Football Association launched what we call the Catch Them Young and I am very proud about this that we have created the environment for kids to develop the passion to be referees which is very critical for our future’’ he said in an interview with ghanafa.org.

‘’We will host the U-17 competition in December and all the matches will be officiated by referees from the Catch Them Young refereeing policy.

‘’I will entreat you to continue to encourage them and to train with them, give them the right level of energy and support because there is always a reward if you mentor someone and they go on to become a FIFA referees’’ President Simeon Okraku added.

The national U-17 Championship is a juvenile product that has been introduced by the GFA to scout and identify young budding talents for the junior national teams.