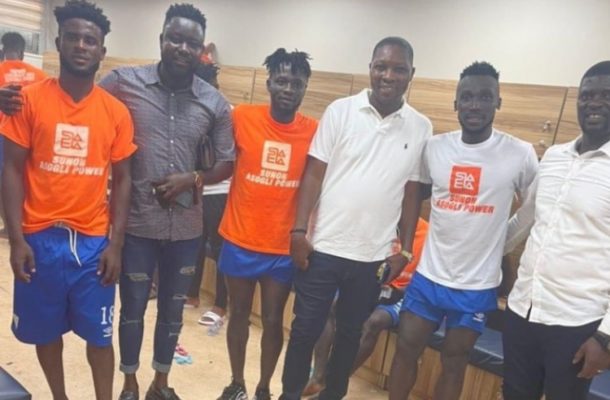 The Chief Executive Officer (CEO) of Happyman Beverages, Emmanuel Bortey has presented a cash sum of GHc10,000 to Accra Hearts of Oak players after their 1-0 win over WAC at the Accra Sports Stadium on Sunday.

Accra Hearts of Oak defeated WAC of Morocco by a slender 1-0 score line at the Accra Sports Stadium in the first leg of their CAF Champions League game.

Hearts piled up pressure on WAC and Salifu Ibrahim delivered a cross from the left flank which was met by Isaac Mensah beyond the despairing dive of the WAC goalkeeper to give Hearts a 1-0 lead with four minutes to end the first half to see off a spirited WAC side.

He presented the cash sum to the club's spokesperson to be shared among the players for their impressive output against the North African side.

As if that was not enough, the technical team were also handed their own envelope by the CEO of Happyman Beverages, Emmanuel Bortey for overseeing the win last Sunday.

The return game has been scheduled for Sunday, October 24 at the Mohammed V Stadium in Casablanca.