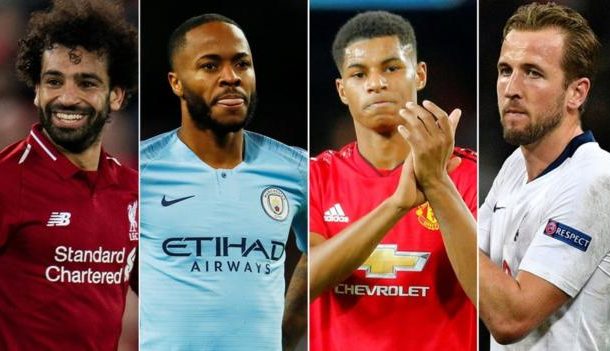 Liverpool will take on German giants Bayern Munich in the Champions League last 16, while Manchester United have been drawn against Paris St-Germain.
Premier League champions Manchester City and Tottenham also face Bundesliga sides, with City meeting Schalke and Spurs playing Borussia Dortmund.
The first legs will take place on 12-13 and 19-20 February, with the return fixtures on 5-6 and 12-13 March.

Group winners will be away from home in the first legs.
Teams could not be drawn against sides from the same country in the last 16, nor against teams who they played in the group stage.
Elsewhere, holders Real Madrid will face Dutch side Ajax, who have reached the knockout stages for the first time since 2005-06, while Serie A champions Juventus face Europa League winners Atletico Madrid.
Spanish champions Barcelona meet French side Lyon, while Italian club Roma face Portuguese champions Porto.
Return to Germany for Klopp
Liverpool, who lost 3-1 to Real Madrid in last season's final, avoided a rematch with the Spanish giants in Monday's draw when they were left in the pot of unseeded teams with Ajax - who played Bayern in the group stage.
The Reds have not played Bayern, who have reached at least the semi-finals in seven of the past nine seasons, in Europe's premier club competition since it became the Champions League.
The German champions have struggled under Niko Kovac in the Bundesliga this season and are third - nine points behind leaders Dortmund - in the table.
But they breezed through a group containing Ajax, Benfica and AEK Athens unbeaten.
Liverpool manager Jurgen Klopp will be returning to his homeland to face the club who beat his Dortmund side in the 2013 Champions League final.


Bayern Munich striker Robert Lewandowski, who tweeted shortly after the draw, is already looking forward to the tieEx-Reds winger Steve McManaman believes his former club have the quality to beat Bayern.
"Liverpool were always going to get a difficult draw," the former England international said on BT Sport.
"No disrespect to Porto, but they are probably the one team you wanted to draw.
"But Bayern Munich are the not the team they once were. This young, exuberant, quick Liverpool team should be too good for them.
"This squad is quicker, stronger and better for the experience after last year."
United face PSG for the first time
Three-time European champions Manchester United have never met PSG, who were the top scorers in the groups, in a competitive game.
The Ligue 1 champions advanced to the knockout stage despite defeat at Liverpool in their opening match.
Despite dominating the French domestic game in recent years, the Qatari-owned club have never progressed past the quarter-finals of the Champions League.
Eins, zwei, drei...
On paper, Manchester City are the English club with the most favourable draw after being picked out against Schalke.
City have been free-scoring in the Premier League as they chase a second successive title, while Schalke are struggling in the bottom half of the Bundesliga after losing eight of their 15 matches.
Spurs, on the other hand, face a Dortmund side who are unbeaten domestically as they aim to end Bayern's six-year monopoly on the German top flight.
The tie should also see 18-year-old England winger Jadon Sancho face Premier League opposition for the first time in a competitive match.
Full draw
Schalke v Manchester City
Atletico Madrid v Juventus
Manchester United v Paris St-Germain
Tottenham v Borussia Dortmund
Lyon v Barcelona
Roma v Porto
Ajax v Real Madrid
Liverpool v Bayern MunichSource: bbc.com