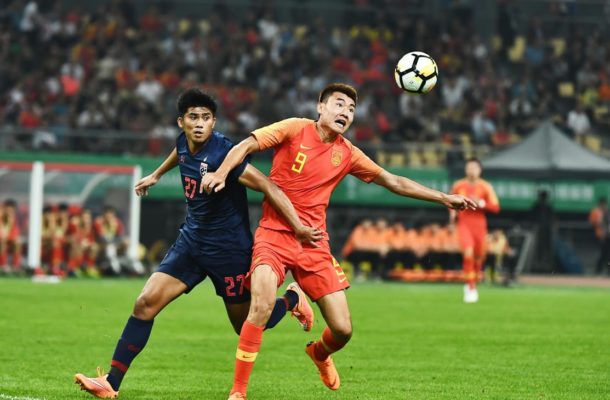 Nanning: A first half strike from Chanathip Songkrasin secured Thailand a 1-0 win over China PR in the 2019 China Cup semi-final on Thursday.


Thailand will meet the winners of the second semi-final tie between Uzbekistan and Uruguay, while China will play in the third-place play-off on Monday.

China began brightly despite playing without ace striker Wu Lei but Thailand showed resilience as the game saw an aggressive start by both teams.

Thailand had a star striker of their own in Chanathip, and he displayed tremendous skill when dribbled past the Chinese defence in the 14th minute but the Hokkaido Consadole Sapporo forward shot straight into the arms of goalkeeper Yan Junling.

China, who are now under the charge of recently appointed head coach Fabio Cannavaro, were aiming to impress in front of their home crowd at the Guangxi Sports Center, but failed to keep their efforts on target with Thai ‘keeper Siwarak Tedsungnoen hardly tested.

In the 33rd minute, China were heavily punished when their defence was caught off guard after a failed run into the final third, with Thailand launching into a swift counter-attack that saw a long cross finding captain Adisak Kraisorn.

Adisak then sent a brilliant through pass to the surging Thitipan Puangchan, who made it into the box before setting up Chanathip with a back pass, and the 25-year-old made no mistake as he hit home to break the deadlock.

China responded by barraging the penalty box with crosses from the flanks but the Thai backline easily dealt with the danger.

Team Dragon did come close to finding the equaliser in the 61st minute but Dong Xuesheng couldn’t keep his header down.

Wei Shao had two golden opportunities on 88 minutes but his header was off the mark and volley safely caught by Siwarak.

In the end, it was not to be for China as Thailand sealed a deserved win.

In the all West Asian affair at the Al Nahyan Stadium, Saudi Arabia settled the quicker but UAE, semi-finalists in the AFC Asian Cup 2019, looked dangerous on the break.

Saudi Arabia's aggression, however, paid off in the 18th minute when the Emiratis failed to properly clear a corner kick, and Adbdulfattah Mohamed Adam sent the loose ball into the net with a right-footed strike.

UAE, however, were unfazed by the goal and pressed forward with Ali Mabkhout coming close eight minutes later when he connected to a free-kick into the box but shot his volley wide over the bar.

UAE had the final chance of the first half when Saif Rashid beat the offside trap in added time and surged down the middle but before he could lay the finishing blow, Saudi goalkeeper Mustafa Malayekah intercepted to bring an end to the first 45 minutes.

UAE returned from the break with determination in their eyes, and less than 10 minutes into the second half, they found the equaliser through Bandar Mohammed.

UAE began to find gaps in the Saudi backline and on 63 minutes, Khalfan Mubarak collected a cross and dashed down the left before sending in a lobbed pass over the defenders which Mabkhout headed home as they held on for the win.
Kuwait City: Kuwait and Nepal played to 0-0 draw in an international friendly match at the Al Shabab SC Stadium.

The two teams will meet once more for another match next Monday.