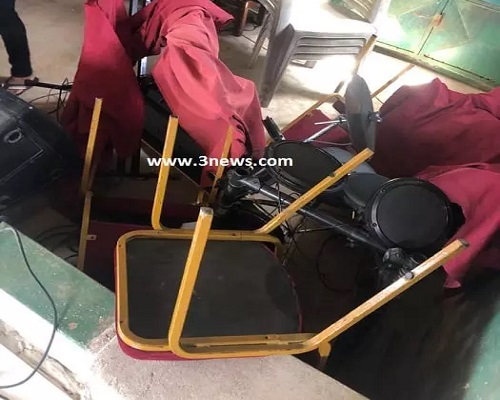 There was chaos at the Praise Tabernacle Church, situated at the Old Dansoman Police Station, near the Dansoman Kit Kat in the Ablekuma West Constituency when some suspected land guards stopped a press conference which was to be held by Concerned Patriots of the New Patriotic Party (NPP).

The land guards, who were numbering over 20, stormed the premises on motor bicycle, wielding cutlasses and other offensive weapons.

They drove away the organizers of the press conference and journalists who had been invited to cover the event.

They destroyed the church’s chairs, tables, plywood, electrical gadgets and other property belonging to the church and organizers of the press conference.


The land guards were allegedly sent by the Ablekuma West Municipal Chief Executive, George Cyril Bray, to disrupt the conference because he suspects the press conference was against him.

Both journalists and organizers took to their heels for their safety.

A microphone belonging to Media General’s TV3 and Onua TV was seized by the thugs. It took the strong intervention of some of the organizers to retrieve it.

Speaking in an interview with Onua TV, one of the organizers, said to be a Polling Station Chairman, said the Concerned Patriots of Ablekuma West were against the renomination of the MCE, George Cyril Bray, by President Nana Akufo-Addo.

Giving the reasons why they are against the renomination, Eric Mensah said “he has a bad taste relationship with the assemblymen, who are party members and also does not recognize them as honourable members”.

“He embarked on unnecessary demolition exercise, leading to massive vote reduction in Ablekuma West,” he alleged.

The chairman noted that “the MCE does not have a listening ears for the grassroots. He categorically stated that the municipality is autonomous [and] not there to serve the party members. This unfortunate statement discouraged most of the members which led to vote reduction against the target set by the Constituency in the just ended elections.

“He does not have an iota of respect for the Constituency officers and therefore calling them useless who have sold our time, freedom and right to our party,” Mr Mensah further alleged.

The party members said the attitude of the MCE has “brought disunity and discrimination in the party”.

“He is not concerned about the welfare of the grassroots. His attitude of discrimination actually led to voter apathy.”

Analyzing both presidential and parliamentary elections held in the Constituency since 2012, the Polling Station Chairman said “in the 2012 election, Hon Ursula Owusu-Ekuful of NPP polled 36,976 votes, representing 58.8% while the then NDC candidate, “Miss Victoria Hamah had 26,153 votes, representing 41.2%”.

“This accounted for a difference of 10,882 votes,” he explained.

The Concerned Patriots said the votes started dwindling in the 2016 election while the opposition NDC keep gaining in the Constituency, a situation which calls for an urgent change in the leadership at the Constituency.

He added that the 2020 elections added more to the reduction of votes in the Constituency and this has infuriated them to call on President Akufo-Addo not to nominate the MCE again.

“The results of the 2020 general election with NPP government in power and the creation of Ablekuma West Municipal Assembly reveals a woeful votes difference of 6,630.

He noted that “analysis of the results shows that the NDC candidate had added over 11,000 votes to what was polled in 2016 while NPP candidate, Hon Ursula Owusu-Ekuful had added over 3000 votes”.

He said they have petitioned the party hierarchy and the Office of the President on the happenings in the Constituency and they hope the President will heed to their calls.

They explained that if President retains the MCE, the NPP will lose in the 2024 election to the NDC.