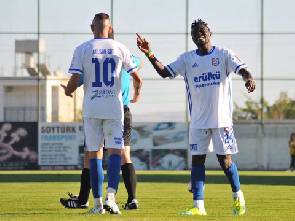 Cypriot-based Ghanaian winger, Charles Teiko Folley made a winning start to his Cihangir career in a 2-0 win over Dumlupinar.

The former Fair Point and Ittihaad Azzarqa wide man joined the Cypriot side in the summer transfer window after an impressive outing in Jordan.

The lanky midfielder, capitalised on his first game of the season to win the hearts of the club’s fan base with his energetic runs in the opening win.

A goal in either half from the host handed Cihangir a 2-0 win to kick-off their season in the domestic championship.

Charles Folley lasted 75 minutes of the fixture, having earned his place in the starting XI of the team.

Speaking to sportscrusader.com after the game, the Ghanaian remained hopeful of picking some laurels at the end of the season.

“It has been a dream start to the season and on my debut game as well.

“Even though I couldn’t find the back of the net, I enjoyed my football which was felt by the fans and the technical team as a whole.

“I am sure we will end the season with a trophy per our performance in the opening games,” Folley told Sports Crusader exclusively.

The attacker came close to joining a number of European sides in proposed deals which fell through on transfer deadline day.