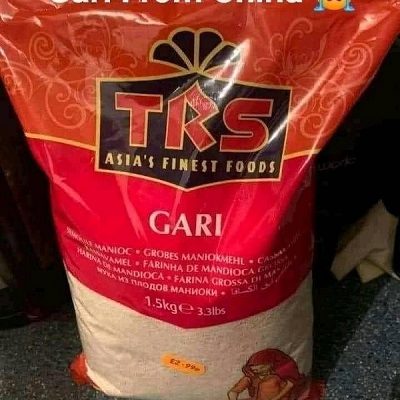 The advent of technology has birthed the development of a small-scale gari production machine by an unknown Chinese company.

Traditionally, the processing of gari often requires the cassava to be peeled and grated but this Chinese company, through its invention, has made its own peeler and grater for gari processing.

In a video sighted by GhanaWeb, the invention of the machine is expected to reduce the burden of the manual labor associated with making dry edible granules and increase productivity.

To provide further insight on the specially designed machine, a lady in the video highlights the various production lines of which the gari processing will undergo.

Gari also offers starch which is obtained through mash fermentation and de-watering processes with the help of a hydraulic press.

For the process, the dry edible granules are fried and sieved in order to achieve it's final product.

Meanwhile, the industrial nation of China has been making rounds in news reports over its resolve to produce and export cocoa beans.

China is said to have begun production on its first batch of cocoa beans in the town of Xinglong in South China and subsequently exported the beans to Belgium weighing 500 kg and worth about US$3,600.

The Ghana COCOBOD on the other hand has expressed worry over the development and described the reports as rather worrying for the future of Ghana’s cocoa industry.