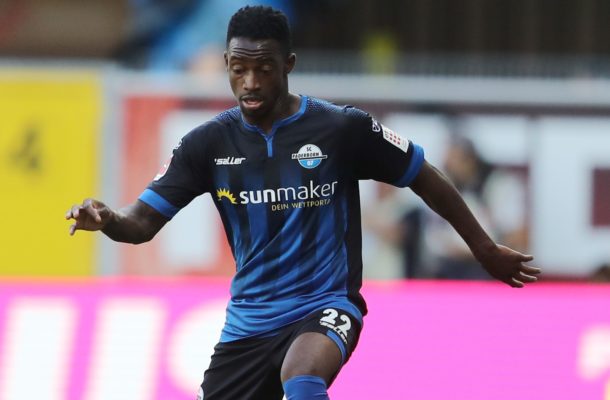 PADERBORN, GERMANY - AUGUST 24: Christopher Antwi-Adjei of Paderborn runs with the ball during the Bundesliga match between SC Paderborn 07 and Sport-Club Freiburg at Benteler Arena on August 24, 2019 in Paderborn, Germany. (Photo by Christof Koepsel/Bongarts/Getty Images)

The Ghanaian winger born in Germany is a free agent at the end of the season and is free to join any club of his choice.

The newly promoted club are keen to snap up the winger very soon with an announcement eminent in the coming days.

According to German news portal, kicker the player has reached an agreement with VfL Bochum to join them with personal terms agreed when his contract runs out at the season's end.

The Ghanaian who joined Parderborn in 2017 helped them secure promotion to the German Bundesliga before they were relegated last season.

For his four years at the club the tricky winger has scored 27 goals providing 17 assists in 144 matches for the club across all competitions.

He was handed his Ghana debut by former Ghana gaffer Kwasi Appiah.