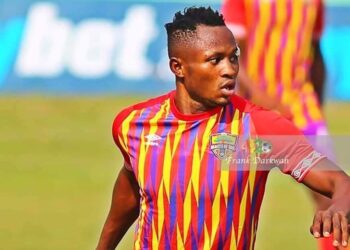 The Public Relations Officer of Accra Hearts of Oak says the decision to let go off star striker Joseph Esso had nothing to do with the management as the player was not prepared to continue with the club.

According to Kwame Opare Addo in a meeting held this afternoon head coach Edward Odoom, team manager Saban Quaye, himself , the MD Fred Moore were al present when the player told them he will only sign a year's contract.

He says the club have been persuading their stay man to renew his then expiring contract over a year ago but to no avail.

"If Coach Odoom says he wanted the player the decision did not come from me Kwame Opare, coach Odoom, the team manager Saban Quaye the MD ,myself were all there" Opare Addo told Citi Fm's Sports Panorama

"So I don't want anybody to interpret the issue as the coach wanted the player and management said we don't."

Asked If the coach was pleased to see his star man leave he answered: "In the first place nobody will say you are okay for a key player leaving but lets put it this way If a player's contract is running to an end and you started negotiations with him three years on and and then the positions of the player remains like that for over a year If the player says I need x,y,z and this is the number of year I need and in this case only one year".