Commercial drivers to strike over introduction of Bus Rapid Transport 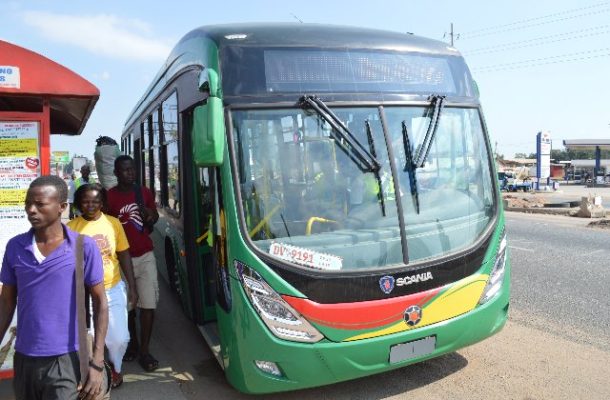 A group calling itself Committed Drivers Association (CDA) has threatened to strike next week Monday over the soon to be introduced operation of the Bus Rapid Transport (BRT).

Spokesperson of CDA, Francis Appiah told Joy News their source of livelihood stands threatened if some outstanding issues regarding the BRT are not ironed out immediately.

He said it is not that “we don’t want the bus to work but what we need is that the bus should work while we also do our work.” But the operators of the company have rejected that.

President John Mahama has promised to commission the BRT before the end of the year to bolster the transportation sector.

Highlighting the 2016 manifesto of the governing National Democratic Congress (NDC) at the State Banquet Hall in Accra Tuesday, he said as a result of the BRT project, a special bus lane would be created to commence the Ayalolo Express.

This, he said would be piloted in Amansaman [in Accra] and when it proves viable and successful it would be expanded to Kumasi, Takoradi, Ho, Tamale and other regional capitals.

Chief Executive Officer of Gapte, managers of the BRT service, Samson Gyamera says the $95 million project which started in 2007 is scheduled to start operations on October 1.

He says they are not moved by the intended strike of the drivers some of whom are being considered to drive the Ayalolo buses.

But Appiah said even though they believe the operation of the bus will ramp-up competition they want unimpeded access to BRT routes.

“We pay road worthy, income tax, insurance among others so there it will be fair if we are granted access to the routes,” he said.