Contrary to popular belief, Greek ruler Cleopatra could have been of African descent 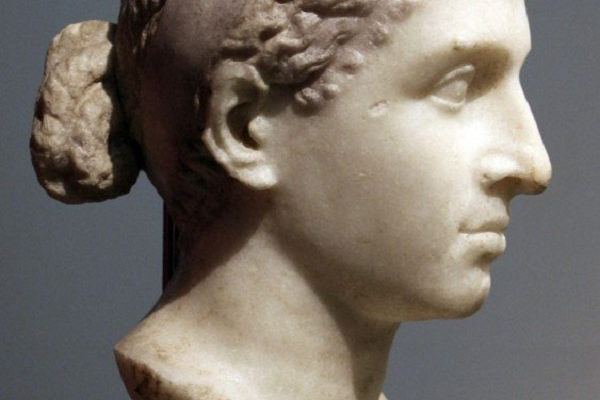 Cleopatra VII Philopator was the last active ruler of Ptolemaic Kingdom of Egypt. The Ptolemaic Kingdom was a Hellenistic kingdom based in Egypt. It was formed after the death of Alexander the Great in 323 BC and ended with the suicide of Cleopatra in 30 BC. She ruled from 69 to August 10/12, 30 BC.

Born in the earlier part of 69 BC to Ptolemaic pharaoh Ptolemy XII Auletes and an unknown mother, Cleopatra’s ancestry is disputed to be Greek, Persian and Ptolemaic – Ptolemies were not documented as intermingling with Egyptians.

However, a headless skeleton of a female child in a 20 BC tomb in Ephesus (Turkey) linked Cleopatra to an African lineage. The now-missing skull found together with old notes and photographs, is believed to be the body of Arsinoe IV, Cleopatra’s half-sister.

In a BBC documentary broadcast in 2009 spotlighting Cleopatra’s possible African lineage, Hilke Thür of the Austrian Academy of Sciences who in the 1990s examined the skeleton and hypothesized that Arsinoe’s mother was African and there is the possibility that Cleopatra’s unknown mother was also African, explaining why they were not mentioned at all.

“It is unique in the life of an archaeologist to find the tomb and the skeleton of a member of Ptolemaic dynasty. The results of the forensic examination and the fact that the facial reconstruction shows that Arsinoe had an African mother is a real sensation which leads to a new insight on Cleopatra’s family and the relationship of the sisters Cleopatra and Arsinoe,” said Dr Hilke Thür.

Cleopatra’s rise started after a revolt in 58 BC when she accompanied her father, Ptolemy XII, to Rome. Berenice IV, Cleopatra’s sister then ascended the throne in Egypt. In 55 BC, Ptolemy XII, reclaimed the seat in Egypt with the help of Roman military forces; Berenice was also killed.

In 51 BC, Ptolemy XII died; Cleopatra and her brother, Ptolemy VIII were named as co-rulers. Soon, the two became enemies and a civil war broke out.

Julius Caesar, a consul of the Roman Republic at the time attempted to resolve the rift between Cleopatra and Ptolemy VIII. Ptolemy rejected the terms and in what is known as the siege of Alexandria, Cleopatra and Caesar were besieged at the palace.

In 47 BC, Ptolemy VIII died in the Battle of the Nile; Caesar was elected as a dictator and he instated Cleopatra and her younger brother Ptolemy XIV as joint rulers of Egypt.

All the while, Cleopatra and Caesar were engaged in an affair that produced a son, Caesarion or Ptolemy XV. Caesar was still married to a prestigious woman named Calpurnia.

In 44 BC, Caesar was assassinated. Cleopatra attempted to have Caesarion ascend the throne by naming him as her heir however, Caesar’s grandnephew Octavian was named as heir instead.

Cleopatra then devised a plan, had her brother Ptolemy XIV killed by poison and instituted Caesarion as her joint-ruler.

Antony held the position of triumvir; a trio of rulers. He used his position to execute Cleopatra’s sister, Arsinoe IV. Cleopatra greenlighted the killing.

Antony married Cleopatra while married to his wife, Octavia. Antony used Cleopatra’s military prowess and funds to assist in his conquests such as those of the Parthian Empire and the Kingdom of Armenia.

Antony and Cleopatra’s children were deemed the rulers of various regions under Roman rule. Cleopatra was also given control over the territories Phoenicia – present-day Lebanon and Ptolemais Akko modern day Acre, Israel.

Cleopatra and Antony were defeated in the Battle of Actium; Subsequently, Octavian forces invaded Egypt and Antony’s forces in 30 BC.

Antony committed suicide after being lied to that Cleopatra had killed herself. Cleopatra then embalmed and buried Antony within her tomb.

Cleopatra learned that Antony planned to have her and her children taken to Rome by Octavius for Antony’s triumphal procession. Cleopatra also committed suicide by injecting the poison of an asp in her body. She was buried next to Antony in her tomb.

Cleopatra was revered for her leadership qualities. She held the titles of diplomat, naval commander, linguist and medical author. She was proficient in the Egyptian language, Ethiopian, Trogodyte, Aramaic, Arabic, the Syrian language Syriac, Median, Parthian and Latin. It is said that Cleopatra wished to place North Africa under the reign of the Ptolemaic Empire.

Cleopatra was single-handedly responsible for establishing laws of the land, holding the title of high priestess which catered to the religious needs of her constituents; she directed Egyptian and Greek ceremonies, led the formulations of Egyptian and Greek temples and a synagogue. She also directed the building of the Caesareum of Alexandria; dedicated to the cult worshipping of Julius Caesar.

Cleopatra built warehouses of food to combat famine, attempted to stabilize the economy by forming fixed exchange rates for foreign currency, and impose taxes, tariffs and price regulation. These attributes made her one of the greatest leaders of ancient Egypt.