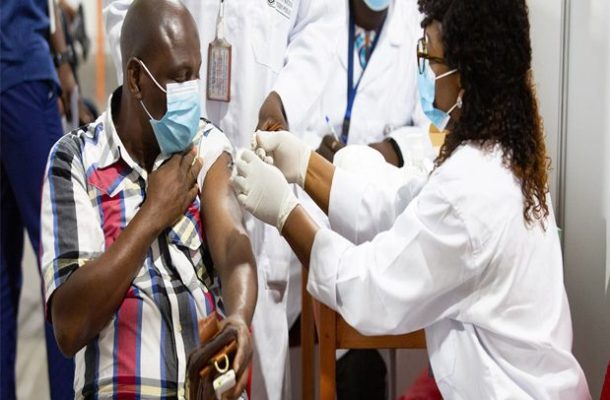 More than 100,000 people have received their second dose of the AstraZeneca COVID-19 vaccine as of Sunday, May 23, data from the Ghana Health Service (GHS) has shown.

He told the media in Accra that 380,000 doses of vaccine had been specifically allocated to those in the first phase and said the exercise would not end on May 26 as stated earlier.

Dr Asiedu-Boeko described the exercise as impressive despite the failure of an online application introduced to make the exercise more effective.

“We are happy about the process so far because, despite complaints about the side effects of the vaccine, people are still interested in getting inoculated,” he said.

Dr Asiedu-Boeko assured the public that government was still making efforts to acquire more vaccines to get more people vaccinated.

He assured the public that the plan to vaccinate 20 million Ghanaians before the end of the year was on course.

Dr Asiedu-Boeko reiterated the need for the public to keep adhering to the COVID-19 safety protocols by wearing face masks, using alcohol-based hand sanitizers, coughing or sneezing into tissues, and washing of hands with soap under running water.

Ghana, on Tuesday, March 2, kicked off its mass COVID-19 vaccination exercise in 42 selected districts in the Greater Accra, Kumasi, and Western regions.

As of Friday, April 30, a total of 849,527 AstraZeneca vaccines had been administered to the public.

The novel coronavirus was first recorded in the Wuhan city of China in December 2019.

Coronaviruses are a large group of viruses that are common among animals. In rare cases, they are what scientists call zoonotic, meaning they can be transmitted from animals to humans, according to the US Centers for Disease Control and Prevention.

It has an incubation period of four to six days and fatal, especially for those with a weakened immune system – the elderly and the very young. It could also result in pneumonia and bronchitis.