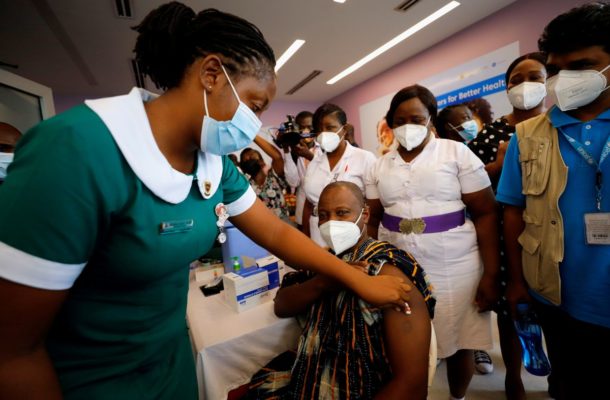 After weeks of apprehension over the fate of Ghana's COVID-19 vaccination programme, the exercise looks set to resume soon.

According to the Ghana Health Service (GHS), 350,000 doses of the Oxford AstraZeneca vaccines would arrive in Ghana Friday, May 7, 2021 aboard a Turkish Airline fight to kick-start the second phase of the nationwide vaccination.

"We were supposed to receive the AstraZeneca doses on Tuesday, Unfortunately, there was a connection flight cancellation and so we are expecting them on Friday," the Programme Manager, Expanded Programme on Immunisation of the GHS, Dr Kwame Amponsa-Achiano, told the Daily Graphic Wednesday.

Fears that the programme could be held back heightened when the second batch of doses from the COVID-19 Vaccine Global Access Facility (COVAX) facility, expected from India, were not forthcoming.

This sent tongues wagging and kept citizens who received the first jab more than two months ago in a quandary.

The Serum Institute of India produces the COVID-19 vaccine developed by AstraZeneca and the University of Oxford.

India has placed a temporary hold on all exports of the Oxford-AstraZeneca vaccine to concentrate on domestic demand in view of the recent astronomical surge in infections and fatalities among its 1.4 billion people.

Dr Amponsa-Achiano said the vaccines coming in tomorrow were part of the consignment that were delivered to the Democratic Republic of Congo but were not used.

Ghana became the first country to receive doses of vaccines from the COVAX facility which has 92 beneficiary countries signed onto it.

According to Dr Amponsa-Achiano, the donors realised that the DRC had a lot of vaccines and that if it continued to go the pace at which it was going, the vaccines would expire.

“So we are picking these vaccines from the DRC because they are not using them.

“We still have a lot of time, the vaccines would expire at the end of June. We have the whole of May and the whole of June, so we can use them and they are safe for usage,” he said.

Dr Amponsa-Achiano said there was no need for people to be afraid of going for the jabs once they arrived in the country, adding that for these vaccines, the shelf life was six months..

He, therefore, urged the media, social media users and the public in general to stop misinforming in relation to the vaccines since it were not helping anybody.

“So if a country cannot use the vaccines, you would not sit down for it to go bad when other countries can use it and it is the same facility the country had initially in February,” he stated.

With the expectant arrival of the vaccines, he said the GHS was planning towards the deployment, targeting those who received the first vaccinations.

Ghanaians, Dr Amponsa-Achiano said, were within the time frame to receive the second doses of vaccines.

At the 2021 May Day celebration in Accra, President Nana Addo Dankwa Akufo-Addo said the receipt of the vaccines formed part of the government's agenda to vaccinate the entire adult population of the country by the end of the year.

Again, he indicated that an additional 1.3 million doses of the Sputnik vaccine were expected to arrive in the country by May 15, 2021.

“We are receiving 350,000 more AstraZeneca vaccines from the COVAX facility on Tuesday in addition to the first consignment of 600,000 that came to us on 24th of February. By 15th May, the government would have procured some 1.3 million Sputnik vaccines.

“We are determined to vaccinate some 20 million Ghanaians, that is the entire adult population by the end of this year, and we remain on course to achieve this goal,” the President said.

The total number of people who have been vaccinated are 846,588. Source: graphic.com.gh