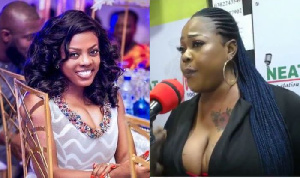 The television personality has not reacted to the accusations but Mona has confirmed that she indeed pimps young ladies to wealthy men.

Speaking in an interview with Ola Michael on Neat FM which was monitored by Zionfelix.net, Mona claimed Nana Aba has groomed a lot of young girls to become Slay Queens and she later give some of them to these men who are interested in them.

Mona Gucci stated that it is not wrong for Nana Aba Anamoah to pimp ladies to men who are looking for them.

She argued there is much positivity in pimping as it saves these ladies from financial stress.

According to her, Nana Aba has more potential customers for these ladies due to her popularity as a TV presenter.

She asserted that Nana Aba Anamoah is the mother of all Slay Queens in Ghana and she has helped a lot of young girls.

Mona also listed some top Slay Queens in the country.

Watch the video below.