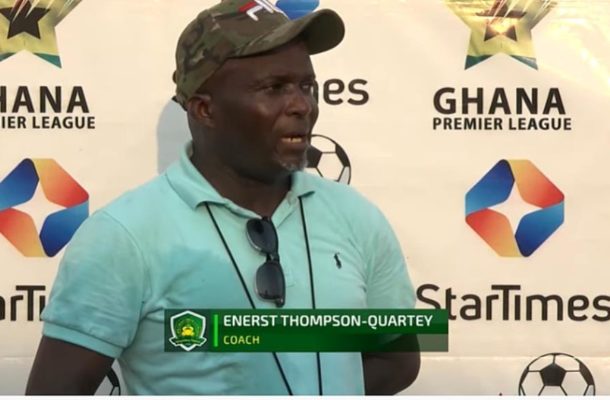 Sacked AshantiGold coach Ernest Thompson Quartey has pointed accusing fingers at technical director Ricardo Da Rocha for stabbing him at the back.

The former Ebusua Dwarfs coach was sacked by the Obuasi based club on Monday 15th November, 2021 after defeat to King Faisal.

Speaking to Accra based Happy FM after his sacking the former AshGold coach has advised the club president to dismiss the Brazilian trainer Da Rocha if he wants the club to move forward.

“I will advise Dr Kwaku Frimpong to send Da Rocha away or else he will destroy his team. The presence of Da Roach will make any coach who goes to the club not succeed.
He has no certificate to work. He stabbed me at the back.

Coach Thompson revealed he had no problem with any management official at the club or fans and was surprised he was relieved of his post.

“I had a good personal relationship with everyone at AshantiGold and had no problem with anyone. Da Rocha is a friend to the club president so he tells him things he (president) wants to hear”.

“I was really disappointed when I got the information to leave the job but life goes on. As a coach, you are hired and to be fired. So it’s normal”, he added.

Ernest Thompson Quartey was employed by the miners in September this year on a two year contract but lasted only two months playing three matches.

He won one drew one and lost one game.