Deal with your soldiers, you don't respect us - Police Officer fumes 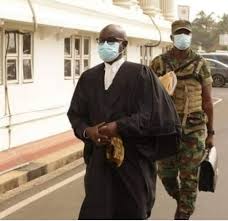 In our series of articles from the public, Police Officer Shephobia looks at the recent  brouhaha about the deployment of military men in hitherto what is supposed to be the core duty of the police.

No one should tell me the military is taking over the work of the police .

We haven't complained .
We are okay with it .

You are the same people saying you have lost confidence in the police because the police man is taking little of the fat and gargantuan bribes you take on daily basis .

We are quite ,but we have also lost confidence in Ghanaians.

One thing you guys must know is that ,personal security matter is a confidence matter and since all of you have lost confidence in us how do you expect us to perform confidence duty .?

Deal with your Angels and leave us out .
They repose confidence .

When President Kuffour took over in 2000 he managed to change the face of the police by first of all recruiting about 400 police officers trained them within and outside the country and made them his personal guards .He restricted the military to the barracks .

He used these men as his personal security together with the general men at the various stations .
Then again ,the public was here .They called them Kuffour police and eventually they were all sent back to their stations and replaced with the military.

In order to enhance the posture of the ordinary policeman ,he changed the style of the police uniform to look more militant .Even common change of uniform style became an issue with majority of Ghanaians arguing that the police will get enough pockets to keep bribes in .🤣

Some of you said ,I remember one famous security expert ( name withheld) who said for security reasons our pocket should be only one .One at the side thigh 🤣.

Indeed ,the hypocritical Ghanaian has refused to cooperate with the policeman even when lawful arrest is to be effected .You have variously said the police is not strong ,meaning we don't give you brute force. You call them mmema mba .Don't you? Keep mute and deal with the military .

My point is that ,the ordinary Ghanaian is very hypocritical towards the police and should stop crying more than us. We are okay with the military performing our duty .

How many of you respect our authority in this country ?

The writer Shefphobia gh is a Police officer in the Greater Accra region.