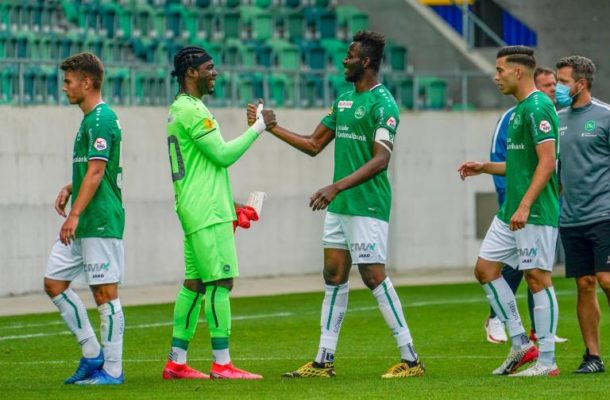 Ghana defender, Musah Nuhu marked his long awaited injury return for Swiss side St. Gallen in their 4-1 win over FC Aarau on Saturday.

The former WAFA rare guard came of the bench in the 83rd minute of the game as he made his first appearances following over six months lay off.

Th Ghanaian international was handed the captain armband as soon as he stepped on the field as a sign of welcome from his team mates who couldn’t hide their joy of seeing him return to fitness.

Nuhu sustained the career-threatening knee injury in June last year during Ghana’s AFCON training camp in Dubai ahead of the Egypt 2019 tournament.

He tore an anterior cruciate ligament in his  left knee and that jeopardized his chances of making his dream debut for the senior national football team.

The 23-year-old underwent a corrective surgery in Switzerland and a subsequent rehabilitation was initiated with the player going through it successfully.

His return to fitness is good news for Ghana and his club side St Gallen who have yet to enjoy him fully since he signed permanently after impressing on loan previously.

The Swiss League is however on break due to the CoronaVirus pandemic and is set to return in the coming weeks.