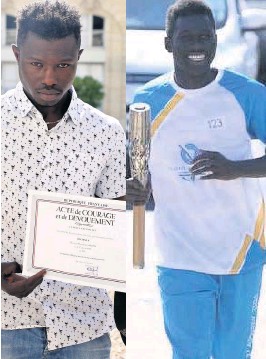 The United Kingdom government has been shamed as they are pursuing an exemplary Ghanaian student nurse for deportation the same time France was honouring an immigrant who scaled four storeys to rescue a child.

While the immigrant saved a four-year-old from imminent death, Theresa May’s government were threatening to deport a student nurse who carried the baton during the Commonwealth games.

Denzel Darku, 23, moved to Scotland from Ghana when he was 14, to join his father.

He was elected to the Scottish Youth Parliament, is a tireless volunteer and was studying at Stirling University to fulfil a dream of working in the NHS.

But the UK government want to kick him out on the technicality he can’t prove he is dependent on his dad.

Given how industrious Denzel has proved so far, it’s a safe bet this guy won’t be dependent on anyone for long. For two years, he has been unable to complete his degree.

Had he done so, he would be now be manning a hospital ward.

More than 826 nursing posts have been empty for three months or more in Scotland, so in the name of self-interest alone, we should let Denzel stay.

French president Emmanuel Macron has rewarded Mamoudou with citizenship, a bravery award and a job as a firefighter and no one deserves it more.

We reward our model citizen with a ticket back to a country he left as a child.

The policy is all about racism, centred on the fact that Denzel is black, just as in the case of the Windrush scandal.