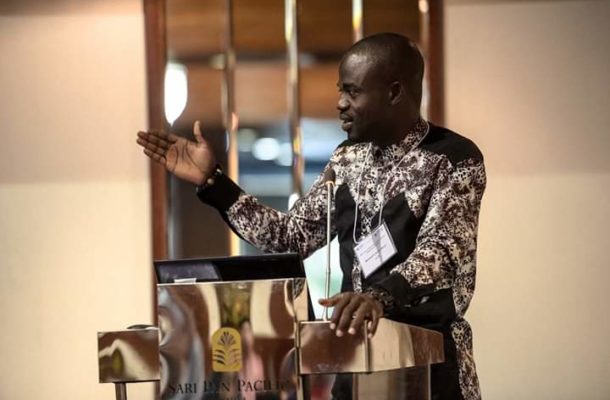 Owner of Zoomlion and the Jospong Group of Companies, Dr. Joseph Siaw Agyepong’s long standing bad wisher and detractor, Manasseh Azure Awuni is ignorantly jubilating and jumping from one platform to another posting his aged story on the court issue between Zoomlion and the Auditor General after the High Court refused an appeal against so-called findings of the Auditor General on disallowance and surcharges amounting to 184, million Ghana cedis.

Now Freelance journalist Manasseh Awuni has over the years trailed Dr. Agyepong with all kinds of allegations of ill stories and pushes for governments to bring the Jospong conglomerate down the way he personally brought down his own brother Mr. Roland Agambire of the Agams Group down in 2014/2015.

I read Manasseh’s posts both on Twitter and Facebook expressing his happiness about the court's decision but he is ignorant because that is just the beginning of the show in court as Zoomlion has hinted it will appeal based on the advice of its legal team after they have read through the detailed judgement in a release. Manasseh misunderstood the ruling especially when he quoted the earlier submissions of the Auditor General’s statement to the court describing the company as being at all material times fraudulent when the judge actually did not say that. I have monitored Manasseh over the years and he has been a perpetual liar and bad wisher for Ghanaian businesses by using his stupid media trial antics to malign and destroy businesses especially the Jospong Group of Companies.

Indeed, I have been investigating Zoomlion on allegations leveled against it by Manasseh and others and I know the contracts Zoomlion had with the government which were jointly viewed by the Auditor General and Manasseh as dubious and unwarranted were the master issues the Auditor brought before the court to make decision on. Not doubting the competence of the legal team of Zoomlion I feel the judge may have erred or otherwise in dismissing the appeal. I also think that Zoomlion must appeal on the basis that when the findings were reached the AG failed to allow the company to make clarifications on the tabled issues knowing that the Auditor General may not understand the issues better. In the face of the comments made by the judge too I believe the details of the ruling may exonerate Zoomlion so it is preposterous for Manasseh to run to the media with such misleading headline.

The AG bulked all the contracts spanning 10 years and described them as fraudulent and dubious which is unfortunate because how does a contract that came as a result of either a proposal or solicited by the state become dubious in favour of the contractor? Who signed the contracts? Did they sign them blindly? What are we talking of?, a case of leaving the face of the drum and beating the back is a clear here.

The other contract has been the Nationwide Mosquito Control Program ( NAMCOP)

which scope includes larviciding of mosquito breeding sites, weeding around water bodies capable of breeding mosquitoes in the cities and towns, public education on the mosquito and what it does to the human being etc. At one time in 2018, the Ministry of Education also contracted Zoomlion to a one-off contract to spray student mattresses and dormitories among others to ride off the spread of bed bugs which were causing harm to the students.

These are the three contracts that involved fumigation and disinfestation and I don't see where the ambiguity is that Manasseh and the Auditor General failed to understand and therefore described them as several needless, dubious and fraudulent contracts.

Maybe I should ask Manasseh to hold his horse and think again whether if he were given a contract to do disinfestation of communal container sites, public toilets and storm drains he would have done larvaciding, weeding of water bodies and mosquito breeding grounds in addition. What is this diabolic obsession of Manasseh against Jospong all about?

Now maybe Manasseh's chronic ignorance of the law, greed and hatred is what is making him so busy going about misleading the public and the media about what the court may have said.

Even though the full judgement is yet to be released to the parties, the judge was clear in her conclusion that there was no fraud in the transaction on Zoomlion, as claimed by the Auditor General. She was also clear however that Zoomlion's appeal was dismissed. She added that there were some negligence which she did not attribute to any of the parties so if Manasseh was intelligent as he wants as to all believe he would have waited for the detailed judgement to be able to adduce any meaning to it.

But because of trite hatred, wickedness and the evil wish to see Jospong down Manasseh run to town with his aged story quoting portions of the Auditor General's unfounded statement and thereby throwing dust into the eyes of the public.

I want to assure Manasseh Azure Awuni that which Dr. Joseph Siaw Agyepong is made of is bigger and stronger than he evil minded Manasseh Awuni who’s arrogance and possessive hatred for Ghanaian business growth especially those of the Jospong’s.

If you find something good to do than wishing people bad it will do you and your family some good.