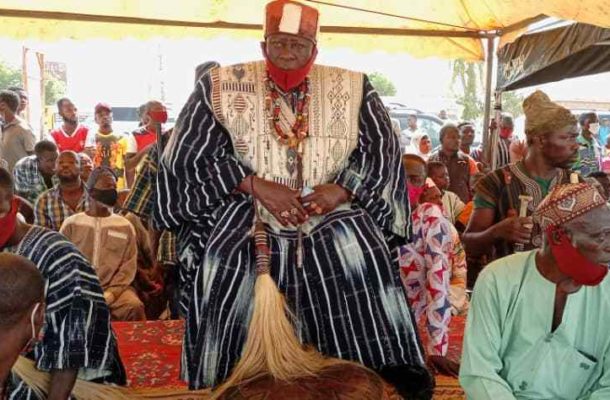 The acting President of Council of Zongo Chiefs who doubles as the Chief of Wangara in Kintampo, Nana Fanyinama III, has advised imams in the country to as a matter of necessity, devote their Jumah (Fridays prayer) sermons to preach Against the practice of  Lesbianism, Homosexuality, Bestiality and Transgender and other related practices, LGBTQI+ in Ghana.

In an interview with the media covered by MyNewsGh.com Nana Fanyinama explained that Ghana is a highly religious nation and the activities of LGBTQs are against the teachings of both the Bible and the and, therefore, detrimental to our society especially the younger generation whom he believes holds the future of the country.

He indicated he had already communicated to some group imams to make the preaching Against the activities of LGBTQI+ at  their various places of worship adding that preaching about Jesus, Mohammed and others is history and not crucial at the moment.

Nana Fanyinama also admonished both Muslim and Christian parents as well as parents of other faiths, to educate their children on the bad effects of LGBTQS in our society and serve as their watchdogs to prevent them from movements that will lead them astray.

“Friday sermons are very important and must focus on happenings within the week and advise the youth. From now to the end of March we must focus on preaching against homosexuality. It is against our religion. It can bring about curses to our land. Let us train our children and put the fear of God in them whether Muslims and Christians. We should not allow the peers of our children of our children to lead them astray. We would account for our stewardship someday”, he charged

He added that the consequences of legalizing the practices of LGBTQ+ in Ghana will be dire as that may can cause God’s anger at is. He, therefore, called on the government to do everything possible including enacting a law that completely bans the activities of LGBTQs in the country.