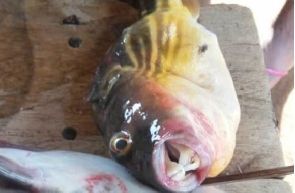 The fish was bought from a local market at Donkorkrom

Four other persons are also on admission at the facility.

The deceased, 48-year-old Forgive Tagbolu and Veronica Agbobli, 71, died on their way to the hospital after complaining of stomach upset.

A member of the family, Kofi Agbobli who confirmed the incident said the victims bought the fish from a market at Donkorkrom.

"They complained of a severe headache and stomach upset few minutes after eating the fish so we had to rush them to hospital but unfortunately they died in the way".

Meanwhile, health authorities have recommended their transfer to the police hospital in Accra for an autopsy.

Kofi Agbobli, however, says they lack the funds to embark on the autopsy.

In January this year, there was a similar case in the Kpando in the Volta region where one person died and six others were hospitalised after consuming the fish.

Four persons also died in August last year at Alavanyo in the Volta region while several were hospitalized after consuming puffer fish.

The puffer fish is a highly contagious sea fish.

It contains tetrodotoxin, a substance that makes them foul tasting and often lethal to its predators including human.