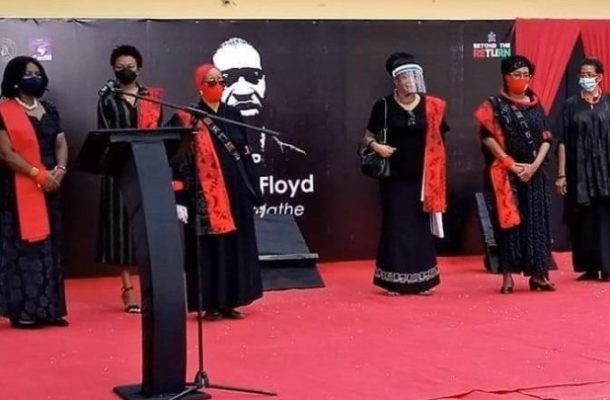 I know the media will never discuss this so I will talk about it. Do you guys remember that recently Nana Akufo-Addo accepted the citizenship of some African-Americans as Ghanaians? These were the people who were at the memorial service of George Floyd, the African-American killed in Minnesota. The staff of the Tourism Ministry were also in attendance.

I am on several platforms including the one called “Politics 101” There is a strong NPP guy on it, called Kwame Antwi-Frimpong of Michigan, USA. He posted Ghana’s memorial service of George Floyd on the platform, apparently, he didn’t like the nonsense his government has gotten itself into. Immediately, another strong NPP guy, “KYG” tagged the video and asked, “what’s wrong with that?” Kwame, the originator of the post also tagged that question and asked “How about we started with what’s good with it?” Immediately the platform that has over 30 strong NPP members on it went ?as if no one saw Kwame’s question.

The secret why George Floyd who has never been a Ghanaian, was not killed in Ghana but had a befitting memorial service in Ghana is that Nana Addo wants the votes of all the African-Americans he gave them Ghanaian citizens. Nana Addo has shown over and over that he cares very less about Ghana and Ghanaians.

Should it take Dr. Lawrence to tell the government that enough of his foolishness?

Ladies and gentlemen, Nana Akufo knows the grounds are not good for his re-election and he is trying very hard to hold unto anything including even de-enfranchising some Ghanaians who want to vote and welcoming returnees from Kuwait as if his government did something about their return.

He has sympathy for an American dead over Ghanaians, just because of politics. If you are a Ghanaian, what Nana Addo did with the dead of George Floyd against the dead of Ahmed Suale and the three Takoradi girls, should tell you that Nana Addo just want your vote to remain President. He doesn’t care anything about you. If you should die right now, he will say “all die be die” and leave you to rot. You don’t wanna listen to such a character if he comes to you and ask you for your vote. He is a con man and you are not stupid.