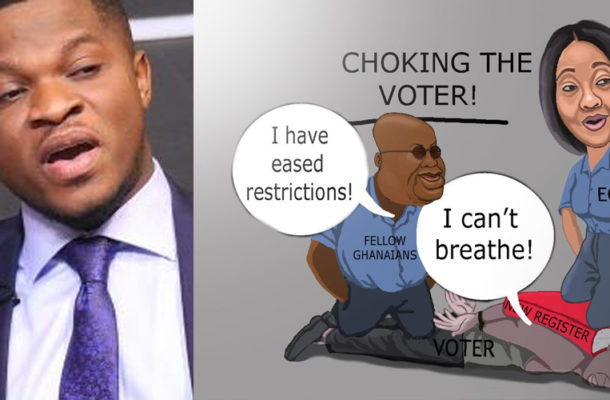 I started like that because of the way they handled the cartoon by Sammy Gyamfi, who used the cartoon to send a democratic message. The message was that Nana Addo and Jean Mensah are using the NIA and the Electoral Commission to take the last breath away from the Ghanaian voter. Even though the cartoon didn’t say so, some idiots were quick to likened it to the death of the black Minnesota man, George Floyd.
This is where the stupidity of the NPP comes in.

They think because the cartoon showed Nana Addo in it, they should just attack without thinking. The message the cartoon was carrying was not only for this generation, but for the many generations yet to come and also good for our young democracy.

The killings of black people by especially white police happen in America all the time. It only becomes news depending on how the killing was done. They demonstrate and within a month, it dies down and within a year, another black man is killed. I say this to mean this thing is not going away anytime soon. They don’t have anything to stop it forever.

But look at the message Sammy Gyamfi’s cartoon is carrying. If it gets the world’s attention and they begin to focus on the democracy of Ghana, I believe they will resource us to make it better.

These benefits will not be for only this generation but for the next generations to come. American democracy has lived almost 250 years because it was built on these principles. This is why I also support Sammy Gyamfi.