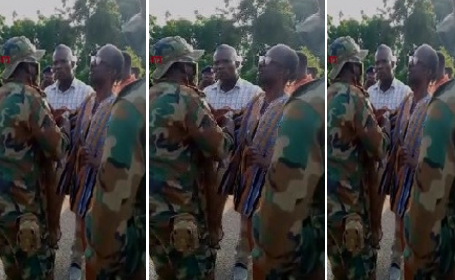 I am per this article calling for the renewal of the debate that sought to question the legitimacy of Nana Addo as a lawyer from an accredited law school. When Nana Konadu Rawlings said Nana Addo has no law certificate and Nana Addo himself said his law certificate is missing, I took them as a joke but looking at the lawlessness in Ghana, I don’t think the President is a legal lawyer. Nana Konadu Rawlings is right.
There is not a single law that works in Ghana now. Even the Supreme Court Judges are lawless. Today, men go to women’s toilets and women go to men’s toilet. There is the need for another house cleaning exercise to bring some sanity in the Judiciary, legislative and the Executive.
The lawlessness started in 2017 when some vigilantes beat Chief Insp. Nanka Bruce in front of the Flagstaff House. Instead of punishing those vigilantes, the police officers who took the video were rather sacked.
This was followed by these same vigilante groups that ransacked a siting court in Kumasi. The guys were called to the Flagstaff House. The President praised their work but cautioned them not to sin again. These same guys removed a regional co-ordination officer from office. The man was appointed by the President. They were made to pay GHC2000 and the case was closed.
Fast forward and the lawlessness appeared at the Supreme Court where it is now illegal to use your Birth Certificate to guarantee your citizenship. I am not a lawyer but this precedent is very dangerous for our country.
A 90-year woman was lynched because a soothsayer claimed she was a witch. It took the President, four solid days to comment on it after he paid a working visit to the area. The soothsayer and all those who killed this old woman are still waking around free as if there is no leadership in this country. Meanwhile, this same President called for justice for George Floyd who was killed in America.
Now look at the intimidation and harassment going on at our registration centers. The only criterial to get someone on the voters register is if that person can speak the Akan language. An MP and a minister shot a gun at a registration center and as of today, the President has not said a word about it. The National Chairman of NPP said the news in the media is an exaggeration and Hon. Hawa Koomson is still at post and free. When the Peace Council was forced to comment on it, they said they don’t do propaganda.
The Auditor General and the Electoral Commissioner were both fired the same way Kwame Nkrumah was fired. The lawlessness in Ghana should get you angry enough to change the government. Just imagine the Ghana you will live in if these tactics of intimidation and lawlessness win them power in December. Think about it.
Dr. Lawrence is the Founder of the Diaspora Progressive Movement in USA.