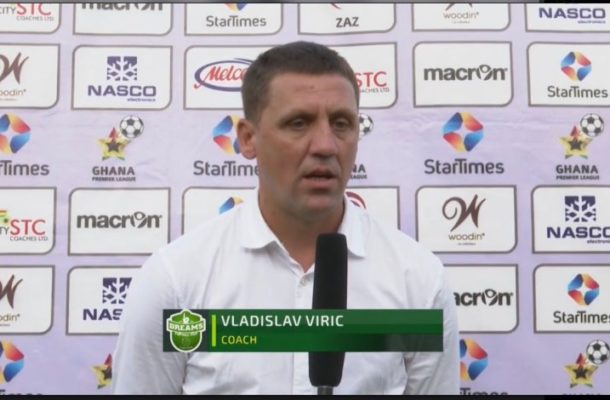 Dreams FC coach, Vladislav Viric has accused the match officials in their game against Kumasi Asante Kotoko of masterminding their defeat.

The home side defeated Dreams FC by 3-1 despite the away side taking the lead from the penalty spot.

Kumasi Asante Kotoko exorcised the 'Medeama demons' that evaded the Obuasi Len Clay stadium the last time they played there as they beat Dreams FC by 3-1.

The porcupine warriors had to do it the hard way as they came from behind to beat the Dawu based side in an enthralling match that was also full of controversies.

Dreams FC's Serbian coach was not enthused with the penalty kick that was awarded Kotoko to go 2-1 up.

“It’s very interesting how eleven against eleven players and some being on the bench," he said after the game.

“Because the game will be a better game, they call some people to help them.

“They are in Black you know, to help them be better game.

“And they weren’t helping today and I’m so sad,” Vladislav Viric added.