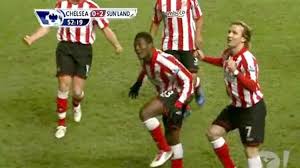 Dutch Legend Boudeweijn Zenden has reminisced a "funny" dancing moment he had with Ghana's Asamoah Gyan in their playing days at Sunderland.

The famous dad dance grabbed the headlines when the  Black Cats trounced then defending EPL Champions by 3 with Gyan been on the score sheet.

Asamoah Gyan is well noted for his dancing moves in most of his goal celebration, having been a music star alongside his football career.

Zenden has hilariously recounted his famous ‘dad dance’ with  Gyan  and other players in an interview with Four Four Two magazine.

When asked 'what was with the dad dancing at Sunderland with Asamoah Gyan?' Zenden replied: "I saw that an Instagram the other week!

"We won 3-0 away at Chelsea, and when he went to the corner to do his quirky dance, I joined in with him.

"It was always meant to be funny. I saw plenty of comical parodies afterwards; Strictly Come Dancing footage with our heads attached to the dancers.

"After that game, the Sunderland fans would sing: 'Zenden give us a dance...'

"I can appreciate that kind of banter."

Sunderland stunned the Premier League as they strolled to a 3-0 win away at Chelsea, who were the defending champions at the time.

When Gyan scored, and celebrated in front of the travelling red-and-white army, he pulled out one of his trademark dances. 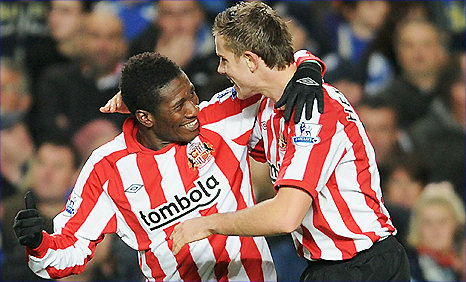 Against his better judgement, Zenden decided to join in and, erm, lacked the natural rhythm of the Ghanaian international forward.

The incident is still spoken about today and has been the subject of many an internet meme.

In a career that saw 'Bolo' take in spells with PSV, Barcelona, Chelsea, Middlesbrough, Liverpool and Marseille, winning major trophies in the Netherlands, Spain and England, the former Netherlands international ended his career on Wearside.

In his two seasons on Wearside, Zenden scored some spectacular goals and was part of only the third Sunderland side to secure a top-half Premier League finish.

But his spell in the North East is not best remembered for his ability on the pitch, rather his infamous 'dad dance' while celebrating Asamoah Gyan's goal at Stamford Bridge in 2010.