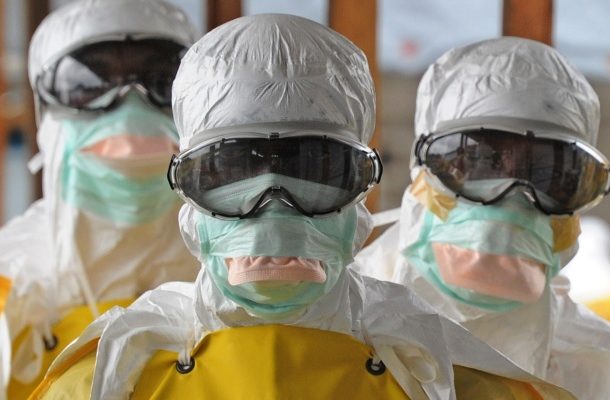 The Ghana Health Service (GHS) says it has received a health alert from the Democratic Republic of Congo on the return of deadly disease, Ebola.

With five confirmed dead in DR Congo, the GHS has advised the public to intensify preventive measures against the deadly Ebola virus.

The Director-General of the Ghana Health Service (GHS), Dr. Anthony Nsiah-Asare, indicated that GHS has received an alert from the World Health Organisation (WHO) on the virus.“We in Ghana have been alerted and we are putting all our surveillance in place. We are also on high alert and the ports and borders are all alerted and the Regional and District Directors are alerted on the signs and symptoms of Ebola,” he explained in an interview.He said there is “no cure for Ebola” at the moment and admonished the public to also take preventive measures because even though the current cases recorded are in DR Congo, “nowadays within a matter of six hours, somebody can move from a distance of about 3,000 kilometres from another place, so, the world is a global village, so, wherever there is an outbreak, it is very close to us”.Ebola virus disease (EVD), also known as Ebola hemorrhagic fever (EHF) or simply Ebola, is a viral hemorrhagic fever of humans and other primates caused by Ebola viruses.Signs and symptoms typically start between two days and three weeks after contracting the virus with a fever, sore throat, muscular pain, and headaches. Then, vomiting, diarrhea and rash usually follow, along with decreased function of the liver and kidneys. At this time, some people begin to bleed both internally and externally. The disease has a high risk of death, killing between 25 and 90 percent of those infected, with an average of about 50 percent. This is often due to low blood pressure from fluid loss, and typically follows six to sixteen days after symptoms appear.The virus spreads by direct contact with body fluids, such as blood of an infected human, or other animals. This may also occur through contact with an item recently contaminated with bodily fluids. Spread of the disease through the air between primates, including humans, has not been documented in either laboratory or natural conditions. Semen or breast milk of a person after recovery from EVD may carry the virus for several weeks to months. Fruit bats are believed to be the normal carrier in nature, able to spread the virus without being affected by it. Other diseases such as malaria, cholera, typhoid fever, meningitis and other viral hemorrhagic fevers may resemble EVD. Blood samples are tested for viral RNA, viral antibodies or for the virus itself to confirm the diagnosis.Control of outbreaks requires coordinated medical services, alongside a certain level of community engagement. The medical services include rapid detection of cases of disease, contact tracing of those who have come into contact with infected individuals, quick access to laboratory services, proper healthcare for those who are infected, and proper disposal of the dead through cremation or burial. Samples of body fluids and tissues from people with the disease should be handled with special caution.Prevention includes limiting the spread of disease from infected animals to humans. This may be done by handling potentially infected bushmeat only while wearing protective clothing and by thoroughly cooking it before eating it. It also includes wearing proper protective clothing and washing hands when around a person with the disease. No specific treatment or vaccine for the virus is available, although a number of potential treatments are being studied. Supportive efforts, however, improve outcomes. This includes either oral rehydration therapy (drinking slightly sweetened and salty water) or giving intravenous fluids as well as treating symptoms.