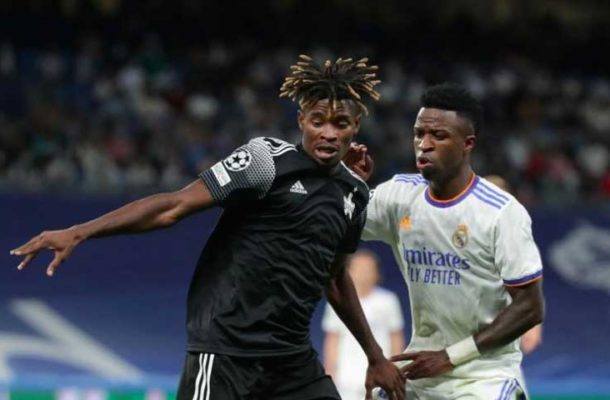 Ghanaian midfielder Edmund Addo shackled the midfield of Moldovan novice Sherrif Tiraspol as they caused one of the most shocking upset against the 13 time European champions Real Madrid at the Santiago Bernabeu on Tuesday night.

The Ghanaian was adjudged to have pushed Vinicius Junior to the turf for Real Madrid's equalizer after a lengthy VAR check but was outstanding on the night.

"Some big players said before there's no place in the Champions League for teams like Sheriff, but it's our place and we proved it.

"We have created a miracle and in the end we have won. I am very happy and very proud for FC Sheriff, but I am more proud of my boys."

"This is so emotional. I'm very appreciative of my boys for this great job," Sheriff boss Vernydub said. "We are a real team.

The defeat was Real Madrid's first of the season but head coach Ancelotti believes his side did not deserve to lose the match.

Addo joined Sherrif Tiraspol from Slovakian side FK Senica this summer and was a player of Colts side Mighty Cosmos.