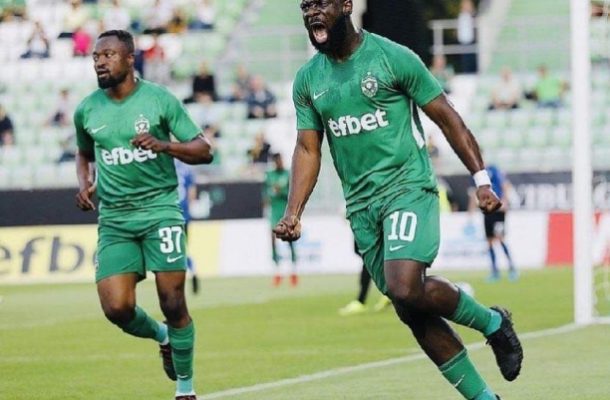 Ghanaian forward Elvis Manu was on the scoresheet for hiss Bulgarian side Ludogorets Razgrad on Saturday evening as they defeated PFC Cherno More 2-0 in the Bulgarian top flight.

Ludogorets started the game on the front foot and their dominance paid off as they opened the scores very early in the game.

The Ghanaian forward opened the scores for his side with a fanciful flick in the 16th minute in front of a packed home crowd.

He did not last the entire duration as he was taken off after getting himself a yellow card with Higinio Marin his replacement.

Compatriot Bernard Tekpetey was also in action as he started the game but was also booked after a poor tackle and was substituted in the 77th minute after his yellow card in the 40th minute.

The home side wrapped up the win with a late penalty kick which was converted by Kiril Despodov to make it 2-0.

The Bulgarian champions will hope to carry their fine form into the UEFA Europa League when they face FC Midtjylland in the match-day 1 on September 16th, 2021 at the MCH Arena stadium in Denmark.