Enoch Owusu scores for Inter Milan in U-17 Milan derby 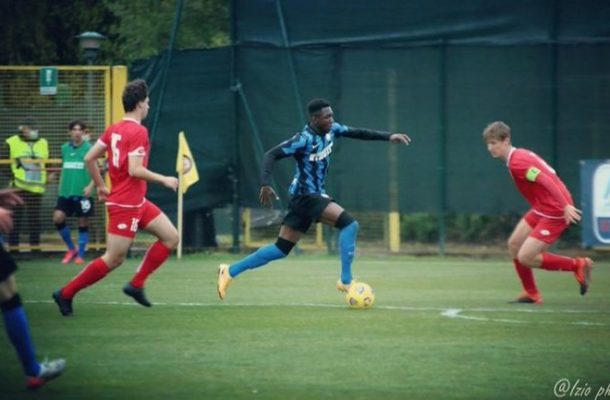 Italy born Ghanaian youngster Enoch Owusu was on the score sheet for the third time in a row for his Inter Milan side as the earned a draw in the U-17 match with fierce rivals AC Milan.

The Bergamo born striker was a thorn in the flesh of their arch-rivals all game as both sides drew 2-2.

AC Milan opened the scores in the 20th minute after another player with Ghanaian descent Emmanuel Anane supplied an assist for Leonardo Rossi to score 1-0.

Enoch Owusu finally got his name on the scoresheet in the 33rd minute after converting home a low cross to draw level at 1-1.

The Italian born Ghanaian has now scored three matches in a row with the goal against AC Milan his fourth goal of the season.

AC Milan restored their lead in the 47th minute after Andrea Bozzolan converted a penalty to make it 2-1.

With 13 minutes to go Andrea Pelamatti got the leveler for Inter Milan in the 77th minute.