Ernest Agyiri scores for his Estonian side Levadia 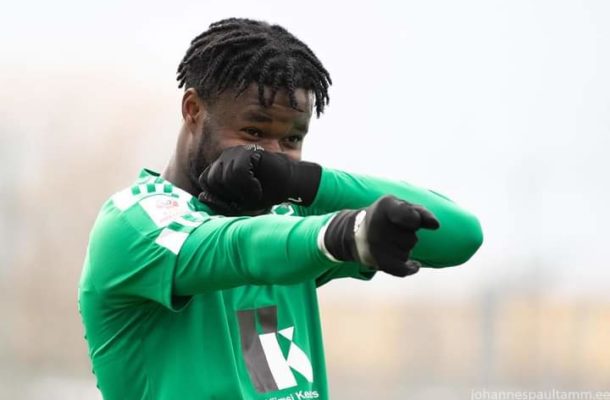 Ghanaian midfielder Ernest Agyiri was on target for his Estonian side FCI Levadia as they defeated Viljandi JK Tulevik in thee Estonian league on Wednesday.

His side posted a dominant 4-1 victory over Tulevik at the A. Le Coq Arena in Tallinn..

The former Man City player scored his second goal in four days as he scored the fourth goal to put the cherry on the cake.

Frank Liivak opened the floodgates for the home side in the 14th minute after a brilliant pass from Zakaria Beglarishvili.

The provider for the first goal joined in the act as he netted his side's second of the day in the 35th minute after expertly converting from the spot.

Tulevik pulled on back before Ernest Agyiri restored the two goal cushion with a third goal in the 69th minute to make it 3-1.

With 15 minutes to goal the home side put the game beyond the away side as Robert Kirss scored the fourth goal.

Agyiri was on target on Sunday when Levadia beat Tartu Tammeka in round 8 of the Estonian top-flight.

The 23-year-old has scored 4 goals in 8 appearances so far this season for Levadia.