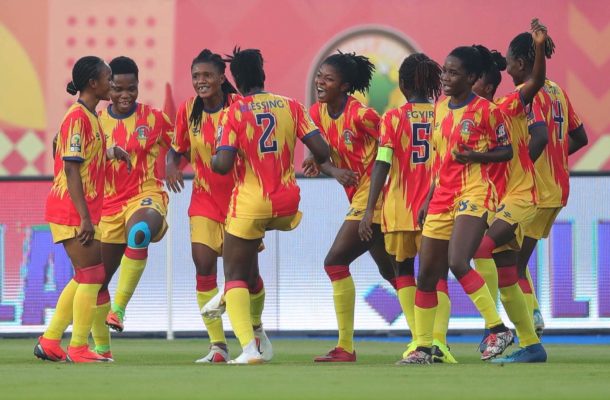 Ghanaian champions Hasaacas Ladies booked their place in the finals of the TotalEnergies CAF Women's Champions League after defeating Moroccan side ASFA by 2-1 in the first semi final at the Al Salam Stadium.

The Moroccans started the game in a dominant fashion but the Ghanaians were resolute at the back as they could not fashion out any clear cut chances.

Hasaacas Ladies showed some intent on the 8th minute as top goal scorer of the tournament Evelyn Badu teed up Veronica Appiah after some good work on the flanks but she blazed high and wide.

ASFAR should have made their dominance count on the 26th minute after Ghizlane Chhiri provided a good pass to teammate Sanaa Mssoudy in the box but her attempt at goal was foiled by Grace Boadu.

The Ghanaians punished the Moroccan side as they showed them how to score with Doris Boaduwaa glancing home a header from a Perpetual Agyekum corner kick in the 35th minute to make it 1-0.

The Moroccans pulled parity on the stroke of half time as Fatima Tagnaout sent in a cross from the flanks which was bautifully connected home by Najat Badri with a volley to make it 1-1.

After recess ASFAR came in strongly in search of the winner but it was far fetched as the Ghanaians should have score but Veronica Appiah's shot was inches wide.

Hasaacas Ladies were awarded a penalty after a VAR review after ASFAR goalie Khadija Er-Rmichi fell Evelyn Badu in the penalty box but Perpetual Agyekum slammed his effort against the post and was slow to react to the rebound.

Hasaacas Ladies finally found the break through through Evelyn Badu who headed a cross from Doris Boaduwaa beyond the despairing dive of goalkeeper Khadija Er-Rmichi  in the 77th minute to make it 2-1 and also score her fifth goal of the tournament.

The Moroccans went for broke in search of the equalizer but it never came as the Ghanaians booked their place in the finals.

Hasaacas Ladies awaits the winner of the game between Mamelodi Sundowns and Malabo Kings in the other semi final.