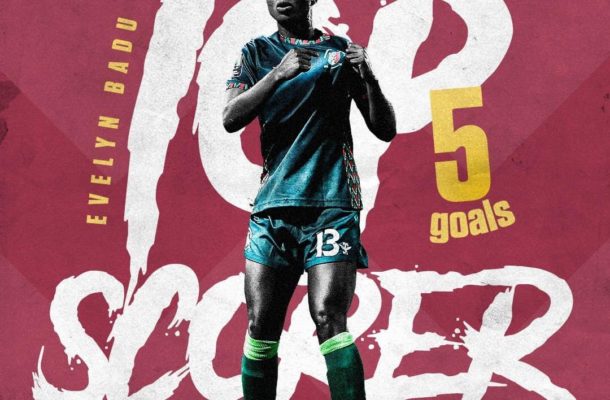 Hasaacas Ladies' attacking midfielder Evelyn Badu has been adjudged as the top scorer of the TotalEnergies CAF Women's Champions League.

The Ghanaian champions were handed a 2-0 defeat by South African side Mamelodi Sundowns in the finals of the tournament on Friday night.

After the group stages, the 19 year old midfielder had scored four goals and was adjudged the best player of that stage but strengthened her grip at the summit of the goal queen chart with her fifth goal against ASFAR in the semi finals.

Hasaacas Ladies found the break through through in the second half after a 1-1 stalemate in the first half as Evelyn Badu who headed a cross from Doris Boaduwaa beyond the despairing dive of goalkeeper Khadija Er-Rmichi  in the 77th minute to make it 2-1 and also score her fifth goal of the tournament.

The 19 year old striker scored twice against AS Mande in the second group game after scoring two against Malabo Kings.

She was unable to add to her tally in the finals against Mamelodi Sundowns as the South African clipped her wings.