Every Ghanaian to have national identification card - Mahama 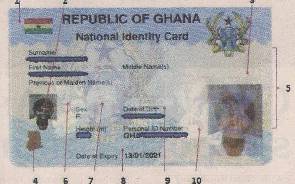 President John Mahama has indicated that the country will finally have a primary database system for citizens and every Ghanaian will have access to a national identification card.

He indicated that if he is given the mandate for another presidential term “we will provide every Ghanaian with a National ID card”.

This was contained in the 2016 manifesto highlights of the party which was presented by the flag bearer of the governing National Democratic Congress (NDC) in Accra on Tuesday September 13.

Mr Mahama explained that government would do an integrated population database system. In addition, he disclosed that “we will complete the house numbering and address system so that you can be traced directly with your house number and street name”.

“All these will be digitised so that in your car, if you can have an application system …you can feed it in directly” and it will lead you to the destination.

The flag bearer of the Progressive People’s Party (PPP), Dr Papa Kwesi Nduom, had stated in the past that the only document that defined a person as a Ghanaian was the National Identification Authority (NIA) card.

He held the opinion that if government would be committed to resourcing the authority, Ghanaians could be registered and issued the card within two weeks. The cards can then be used for any transaction including cleaning of the voter roll.

“Any voters’ register that is not put together based on the NIA database is not correct and will not be correct,” he told Emefa Apawu on Class FM’s 505 news programme on Friday 15 April, 2016.