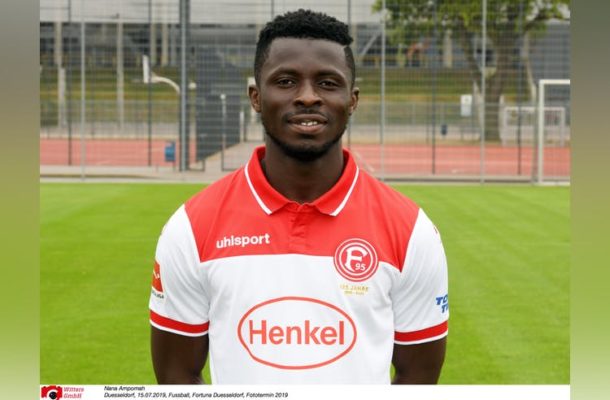 Fortuna Düsseldorf attacker, Nana Opoku Ampomah is set to return to Belgium with champions Club Brugge leading the race for his signature.

But the Ghanaian international has endured a torrid campaign with the Bundesliga club as a result of a recurrent ankle injury and subsequently a fall out with manager Uwe Rösler.

Reports indicate that Fortuna Düsseldorf have placed Nana Ampomah on transfer following their relegation to the German Second tier and the attacker is already attracting the interest of several top European clubs.

Clubs in Germany, Holland, England and Belgium have lined up for the services of the pacy attacker but a return to Belgium now looks likely with Club Brugge the most likely destination.

Sources close to both Ampomah and the Belgium champions have disclosed to Ghanaguardian that talks are ongoing between the two parties and a deal could be reach in the coming months.

"The player[Ampomah] is interested in going back to Belgium and Club Brugge are serious about getting him.

"The initial plan was to have a good season with Fortuna Düsseldorf and move on to a bigger club in Germany or England from there. But it didn't happen the way wanted it but Belgium will be a good place to start again.

"Ampomah is used to the terrain and Brugge have been interested in him since his days with Beveren," the source told Ghanaguardian in a conversation.