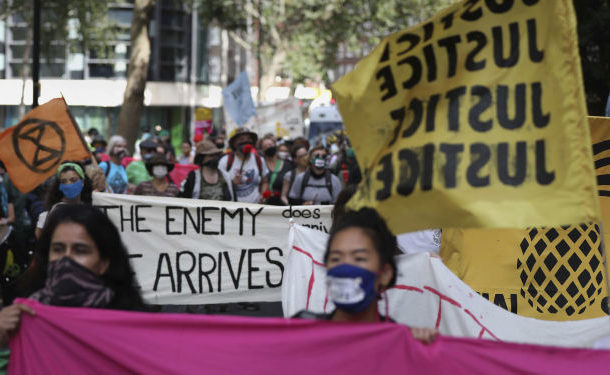 Earlier this week, members of the group glued themselves to the ground outside the entrance to Westminster in order to "peacefully disrupt the UK Parliament in London".

Extinction Rebellion activists have blocked roads leading to printworks used by News Corp UK, publisher of The Times and The Sun, and by other newspapers, including The Daily Telegraph and the Daily Mail.
Dozens of protesters formed blockades cutting off the printing sites in Broxbourne, Hertfordshire, and Knowsley, Merseyside to stop the distribution of the press, as well as a site in Holytown near Motherwell to disrupt the distribution of The Scottish Sun.

We're here all night, folks! We're going to to filter out the lies and take the power back for a night.FREE THE TRUTH#ExtinctionRebellion #freethetruth #ClimateEmergency #WeWantToLive pic.twitter.com/mUhFvp0tc5
— Extinction Rebellion UK ? (@XRebellionUK) September 5, 2020

​Some of the protesters locked themselves to vehicles, claiming they were "using disruption to expose the failure of these corporations to accurately report on the climate and ecological emergency".

​"Once again, Extinction Rebellion's actions in breaking the law and causing such disruption will alienate more people who otherwise might be sympathetic to their views on climate change", chairman of the Defence Select Committee Tobias Ellwood said.

​The group is demanding that Parliament adopt what activists are calling the "climate and ecological emergency bill" which will bind the government to its Paris Agreement commitments on climate change.