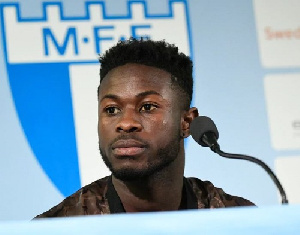 Asante Kotoko have vehemently denied reports Ghanaian youngster Kingsley Sarfo is set join them after he was released from prison in Sweden.

Reports in the local media on Friday indicated that the talented 24 year old has arrived in the country after serving time in the European country following his incarceration over a rape accusation which he has consistently denied.

However, Communication Director for Kotoko, Kennedy Boakye-Ansah insist no agreement is in place to sign the player, describing the reports as "fake news"

“It is never true Kotoko have signed Kingsley Sarfo formerly of Malmo FF in Sweden but it's Kingsley Effah formerly of Wa All-Stars", he said in an interview with Kumasi-based Ashh FM.